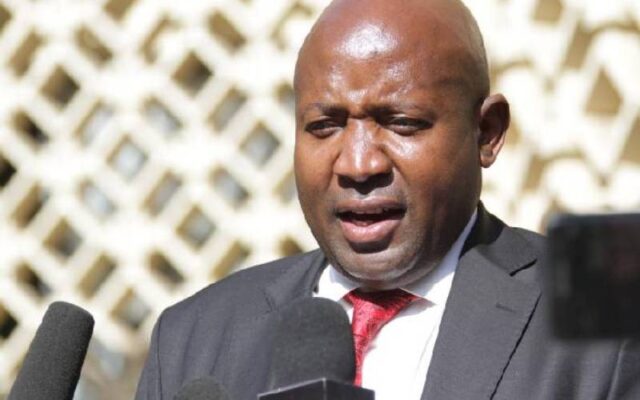 Ayub Savula Angatia is a Kenyan politician who made headlines at the 31st December Bukhungu II meeting held in Kakamega County bringing together a section of Luhya leaders under the leadership of COTU Secretary General Francis Atwoli. At the event attended by thousands of Kenyans, Ayub Savula announced in clear terms that he had shifted gears from the One Kenya Alliance to join Azimio la Umoja. This article looks into the politician’s biography highlighting his background, career journey, personal life, and details of his political gear shift.

He attended Manyonyi Primary School where he completed his studies and did his Kenya Certificate of Primary Education examination in 1989. After that, he joined Lumakanda Boys Secondary School in the next year but would finish his high school education at Vihiga High School. In 2001, Ayub Savula enrolled at the Kenya Institute of Mass Communication pursuing a Journalism diploma program. He revealed in 2021 that he had ANC leader Musalia Mudavadi to thank for his education at the institution saying, “Musalia Mudavadi educated me. He paid my entire school fees when I was at the Kenya Institute of Mass Communication.”

Afterward, he enrolled for a Communication and Public Relations degree at Moi University graduating in 2010. He then went back for his master’s degree of Philosophy in Communication at the same institution.

Between 1998 and 2007, he worked at Standard Media Group Limited in the position of a regional news editor. He would later be Managing Director at Cross-Continental Venture Limited before he ventured into the entrepreneurial journey founding Express Media Group that he runs to date.  He also owned Sunday Publishers, a company that made it to the news in 2021 over four years of unremitted taxes amounting to Ksh 473,000,000.  In defense, Ayub sought to pay security of Ksh 3,000,000 but was denied by the court which said, “In any case, I find that the security of Ksh3 million being proposed by the appellant (Savula) insufficient and too low considering the tax liability at stake.

“Security of Ksh 10 million in the form of a bank guarantee from a reputable bank would be the most appropriate taking into account the circumstances of the case.” The company has since then been dissolved.

Ayub Savula’s political career kicked off in 2013 when he was elected to the National Assembly on a United Democratic Forum Party ticket. In the 8th August 2017 general elections, he was re-elected to office this time on an Amani National Congress party ticket. On 31st December 2021, he announced that he had ditched the One Kenya Alliance movement joining Raila Odinga’s Azimio la Umoja. He along with four other MPs and eleven MCAs made the gear shift at the highly publicized event.

Ayub Savula said, “I want to state categorically that I have officially ditched OKA from today.I have not defected from ANC but I have today officially joined the Azimio La Umoja.”

Not much is known about the MP’s personal life as he keeps this away from the public limelight.

He is a millionaire credited to his business and political career estimated to be worth $300,000