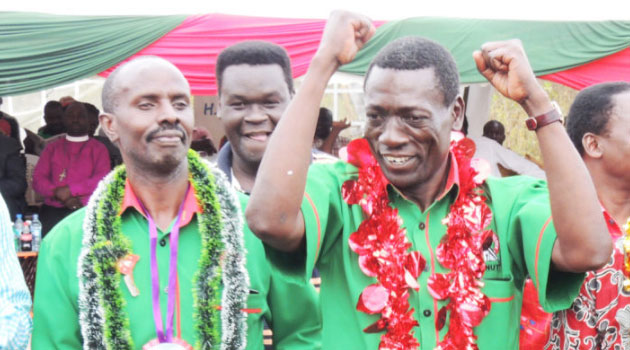 Collins Oyuu is the new face of the Kenya National Union of Teachers (KNUT) after former Secretary General Wilson Sossion called it quits on 25th June 2021. Collins Oyuu was previously chairperson to the Union during Sossion’s tenure as Sec. Gen. This article looks into the personal life, background, net worth, and biography of Oulu, who was not in the best of terms with Sossion towards the end of his term.

He is a trained teacher, after undertaking a Bachelor of Education in the university.

His professional career kicked off with him being placed to teach Ruma Primary situated in Siaya. Shortly after in 1996, Oyuu joined the Union as Siaya-branch’s executive committee member. Between 1996 and 2021, he has served in various capacities in the Union.

These include charing the Bondo branch, secretary for the Rarieda branch, the Union’s assistant secretary-general in 2015, vice-chairperson in 2018, and in 2021 was elected as Secretary-General.

Dr. Sossion called it quits stating that his efforts at the Union were not being supported by the government and that he wanted to fully pursue his political aspirations, an endeavor that was impossible in his former capacity.

Read: Why Teachers’ Salaries May Delay up to Next Week

Collins Oyuu’s tenure will be tasked with restoring the union, which is presently on the verge of collapse, to its former glory. He intends to increase membership numbers, foster relations between the Union and the Teachers Service Commission, improve terms and conditions for its members, and its relations with the government. Oyuu looks to bring a difference in how the Union is run. This is because he has been a consistent critic of the former Sec. Gen’s leadership of the Union.

Collins Oyuu is married with children but keeps private information away from the public. He is a passionate teacher and committed to the profession.