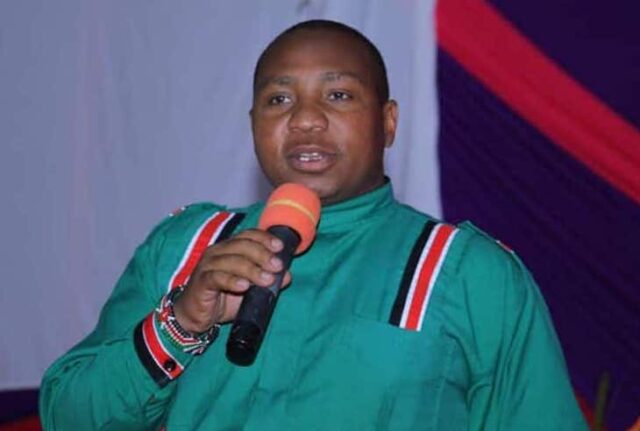 David Ole Sankok is a nominated Member of Parliament under the Jubilee party. The MP represents people with Disabilities in the National Assembly.

Sankok was born in 1978, in Entolol location, Narok. He had a normal childhood and he enjoyed playing football and sprinting. This was until an injection by the doctor paralyzed his right leg completely. He has since experienced stigmatization, seclusion, and ridicule growing up.

The Member of Parliament went to Ole Sankale Primary School for his primary education. Later, he joined Kericho High School where he served as school captain for a while. In 1998, he pursued medicine at the University of Nairobi.

Sankok’s political career started in university, in 2000 when he was elected SONU chairman. This was quite an important moment for him as his daughter, Naserian, was born on the day of his swearing-in. However, Sankok’s time as the SONU chairman only lasted 7 months due to him being suspended. He explained that his suspension was a result of a fallout with the authorities due to the introduction of parallel degree programs.

Ole Sankok later fled to Norway to study for a Diploma in Medical Research at Bergen University. This was after he was arrested 11 times and had his life threatened three times in Kenya.

He later returned to Kenya in 2002 after the government pardoned all suspended students, and later graduated in 2005 with a Bachelor of Science in Medicine (Surgery) at the University of Nairobi.

Ole Sankok served as a director/ board member of the National Government Affirmative Action Fund from 2012 to 2014 when he became the National Council of Persons with Disability chairman up to 2017. He was then nominated as the Member of Parliament for People with Disabilities.

Apart from politics, Sankok works in other different sectors including real estate, farming, and director and owner of OSIM country lodge.

Ole Sankok is a father of six, two girls and four boys. He is known as a family man who loves his family and is never afraid of showing it. He met his wife when she was still a student at Ole Tips Girls and developed a relationship with her. However, he was a bit skeptical about the whole relationship due to his paralysis. The two later got married before Sankok joined university, at the age of 21.

According to different reports and sources on social media, Memusi Sankok shot himself to death on Monday, May 2nd, 2022 using his father’s gun. Memusi was a form four student at Maseno High School. Different sources state that what instigated the suicide was an alleged fallout between Sankok and his son over his academic results. However, there is still no official report on the cause.

It is also reported that Sankok was running errands at his Osim rural resort, kilometers away from his home in Ewaso-Ng’iro, Narok South Sub-county, where the incident took place.

“The father was not home when the boy shot himself and it is not clear how he accessed the firearm that should have been properly secured,” a senior officer told the star.

The Directorate of Criminal Investigations(DCI) is currently undertaking a further investigation into Sankok’s son’s death.