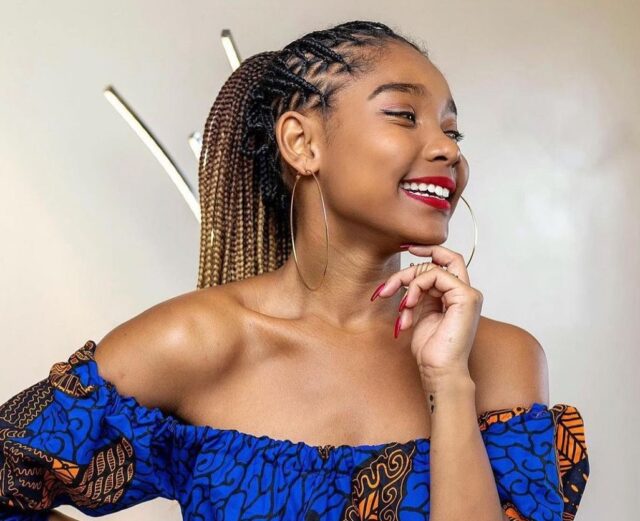 Elodie Zone is a YouTube content creator, social media personality and commerce entrepreneur. She has recently making rounds on the internet following her break-up with Sauti Sol’s protégé Nviiri the Story Teller of Sol Generation. Several reactions have elicited around the issue with varied opinions being aired by Kenyans online.

Born on 23rd November in 1996, Elodie is a twenty-five-year-old hailing from Nairobi, Kenya

Elodie began schooling attending her primary and secondary school levels of education in Nairobi. Further details on her academic qualifications or background after secondary school are yet to be established.

Elodie has crafted a career on the internet and incorporated it with her real-life occurrences to make herself an earning. She is famous on Instagram, having 160,000 followers, a number that shot up after her incident with Nviiri the Story Teller spewed over the internet.

She uses the platform to showcase her business –Kiyana Designs which is a clothing line. She also uses it to invite her followers into her personal life, her engagements and hobbies. She gets paid partnerships on her page which is one of her means of monetizing her social media.

She is also a vlogger, creating content on YouTube where her channel has a 34,400 people following. Her content revolves around travels, celebrations, mind, soul, skin and hair. Her followers are mostly women of the ages between 18-30.

Elodie Zone also has a musical streak which was perhaps one of the things that connected her with Nviiri over their relationship. she has released some music on SoundCloud including ‘Can we Get Higher’, ‘So Faded’ and ‘It Goes On’.

Elodie previously dated Sean Andrews before Nviiri. The two had been friends for more thaan seven years and had kept their relationship secret for a while before finally opening up about it. She dated Nviiri where the two worked together on projects and supported each other’s crafts.

The two fell out and Elodie took to her Instagram stories to expose Nviiri as physical and emotional abuser and asked women to not stay in such relationships. Nviiri kept silent and later on Elodie claimed that the incident had been blown out of proportion and said she had been under alcoholic influence when she exposed her ex-boyfriend.