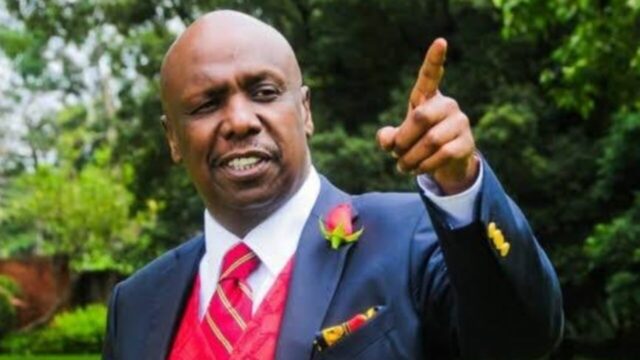 Privilege affords one so many opportunities in life that you cannot ordinarily get by hustling. When you are born as a president’s son, the chances of you succeeding at things in life are heightened by so much. This has been the case for one Gideon Moi who is the son of the late President Moi of Kenya.

The prodigy has relentlessly followed in his father’s footsteps in his endeavors. In addition, he has employed a hardworking and charming spirit just like his father who ruled the country during its early political stages. In this article, we will explore the life and work of Gideon Moi and gain further insight into the man’s stellar life and accomplishments.

Gideon Kipsiele Moi was born in Kenya in October 1963, just around the same time Kenya gained its independence. He is currently 58 years old

In Kenya, very few are born with the privilege that Gideon Moi has. He was born and bred by loving and hardworking parents in their Baringo home. At the time, his father, the late and former president Arap Moi had not assumed his position of power and neither were the prospects in the open.

However, he was a politician at the time and this is what increased his chances of getting the acclaimed position. Gideon got his education alongside his other siblings and taking advantage of the opportunity he had, excelled exceptionally well. He proceeded to The University of Salford, where he obtained a Bachelor’s degree in the arts and completed his education.

Gideon was an apprentice who followed in his father’s footsteps in politics. Owing to his prowess and inherent popularity amongst his people, he got the seat as a member of parliament of Baringo, his hometown in 2003. This set the pace for his later career where he would become a member of the senate-house in the Kenyan parliament. He also took over from his father and became the party leader for the Kenya African National Union Party.

Gideon Moi is married to one Zahra Mio and together they have three lovely children. He has managed to keep most of his life private from the prying eyes of the media and not much is known about his family life. When it comes to politics, he is a don just like his father, and he is doing exceptionally well at it.

Gideon Moi Net Worth and Assets

Born with a silver spoon in his mouth, Gideon has been wealthy right from his childhood. He owns vast lands and has shares in almost all very well doing businesses in the country and abroad. His net worth is at an estimated and staggering Kshs 120 billion.