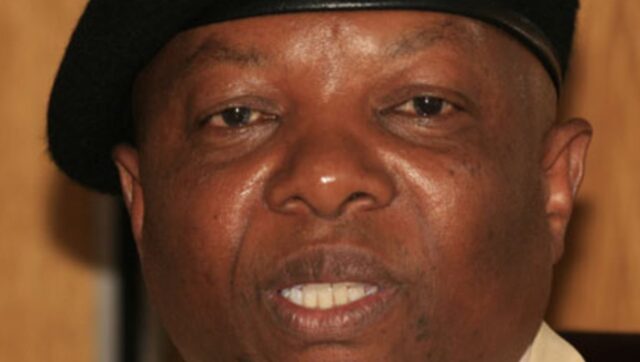 James Waweru who has been serving as the Jubilee Party’s Executive Director died on 23rd March 2021 while receiving treatment at Karen Hospital.

Prior to the job at Jubilee, James had also served as the Sports Principal Secretary (PS) and Nairobi PC during former president, Mwai Kibaki’s administration.

Details about Waweru’s age and place of birth are yet to be updated.

James has been Jubilee party’s Executive Director. Before joining the party, he also served as Nairobi’s Provincial Commissioner.

In a statement, the party said Waweru died on Tuesday morning, enroute to Karen Hospital in Nairobi.

He is survived by his wife Cecilia Muthoni, sons Victor Waweru, Martin Murage and lan Wamunyu, and daughters Eddah Waweru and Abi Murage.

In his eulogy, Mr Tuju said he had an impeccable career in the civil service, rising through the ranks to the level of a provincial commissioner and later a PS in the Ministry of Youth Affairs and Sports.

“In his latest assignment as Executive Director of Jubilee Party at the headquarters in Pangani, he provided sober, reliable and dependable leadership,” he said.

“He has been the embodiment of wisdom, always a voice of reason and a father figure who will be greatly missed.”

President Uhuru Kenyatta, leader of the Jubilee Party, described Waweru’s death as “a big blow to the country he served with distinction for many years as an administrator”.

In his condolence message, President Kenyatta said Waweru was a seasoned public servant who left a mark of excellence wherever he served.

“It is unfortunate that we have lost one of Kenya’s most seasoned administrators. Waweru’s commitment, personal discipline and loyalty to the country saw him rise through the ranks to become a top public administrator,” he said.

“As the ruling Jubilee Party, we’ve lost a trusted, loyal and efficient leader, whose contribution as the most senior executive has ensured our stability and progress,” he added.