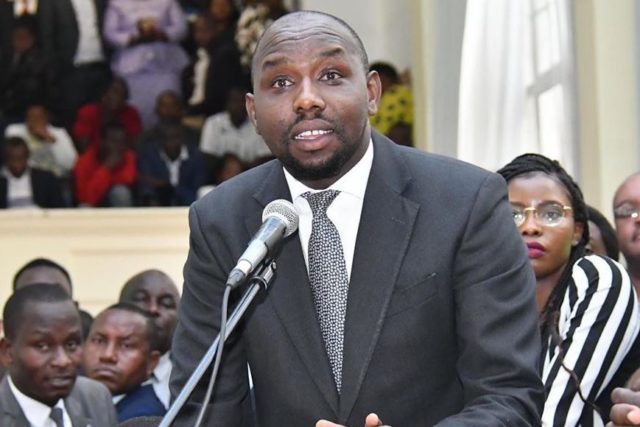 Onesimus Kipchumba Murkomen is a Kenyan politician and lawyer who currently serves as the majority leader of the senate, a political analyst, a lecturer and the Senator for Elgeyo-Marakwet county.

Kipchumba is 41 years old as of the year 2020. He was born on 12th March, 1979 in Elgeyo Marakwet county and hails from the Kalenjin community of Kenya.

Leadership and politics have always been part and parcel of Murkomen. This can be traced back to high school where he was elected as the dining hall captain. Fast forward to his University of Nairobi days when he was elected as the chairman of the Kenya Law Society while he was in second year.

In 2012, he became a member of the United Republican Party. In February 2013, he made a coalition with TNA to form the Jubilee Alliance. The party later voted him in in 2013. In March 2013, he was elected as the Senator of Elgeyo Marakwet county.

Murkomen is the Senator of Elgeyo Marakwet county. Apart from that, he is also the majority leader of the senate. He also works as a lawyer, owning the Sing’oe, Murkomen and Sigei law firm. He is also a Lecturer at the Catholic University of East Africa, the University of Nairobi and Moi University.

In 2017, Murkomen was re-elected on a Jubilee ticket as the senator of Elgeyo Marakwet county. He won against the former Inspector General of Police David Kimaiyo. Murkomen’s political party is Jubilee party and he is such a die-hard member.

Together with his close friends, they own a law firm. His interest came in after he worked for an international law and lobbying firm in Washington DC. The firm is known as Sing’oe, Murkomen and Sigei Advocates.

A while back, Murkomen’s house was at risk of being demolished after the Kenyan Forest Service zonal manager confirmed that the 4- bedroom house at Staat market was technically inside the forest. This meant that it was targeted for demolition by the government.

Murkomen is married to his gorgeous wife Gladys Wanjiru. They got married in 2009 at an African- themed wedding. Together they are blessed with 4 children; 3 sons and a daughter.

It is also quite known that Murkomen is a responsible husband and father, always making sure he spends quality time with his family.

There were rumours circulating, stating that Murkomen was having a love affair with Naisula Lesuuda, who is a former nominated Senator who won a parliamentary seat on a Jubilee party ticket. The rumours have since died down after both parties denied the claims.

There were claims stating that Murkomen earns Kshs.10,000 every month after deductions. He has since come out to state that he makes over Kshs. 1 Million every month, thanks to his work and investments.