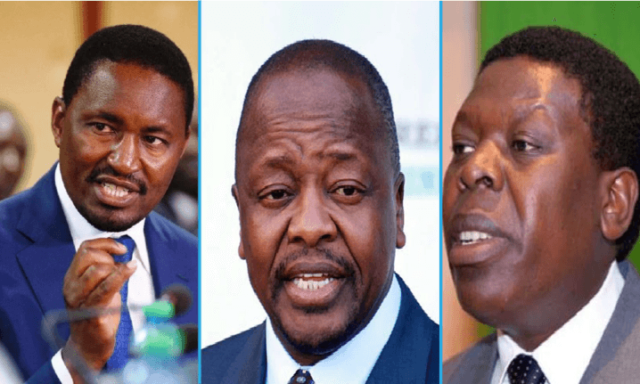 Kenya is home to many wealthy and powerful people in its growing economy. As you will find out in the list below, most rich people are not so because of the paycheck they receive. As a matter of fact, most of them grow their riches out of their salaries and they hardly ever need that paycheck because they ate busy making sure that they have several streams of income. Below is a list of top ten richest Cabinet Secretaries in Kenya;

With his net worth standing at  approximately Kshs. 799 Million, there is no doubt that Mwangi Kiunjuri is one wealthy man thus topping our list richest cabinet secretaries in Kenya. He is the current Cabinet Secretary for Agriculture. He has been able to accumulate a lot of wealth by investing heavily in real estate in mostly Sagana, Nanyuki and Nairobi. Mwangi Kiunjuri currently stands as the richest CS in Kenya.

He is the Water Cabinet Secretary, with a net worth of approximately Kshs. 796 Million.  He is also the former director of the Betting Control and Licensing Board (BCLB- Kenya).  His wealth is mostly from investment in farming, real estate and movable assets.

He is the recent Health Cabinet Secretary elect. Mutahi Kagwe has always been known as a very hardworking person especially since he is very open about sharing his wealth journey. He started growing his wealth 40 years ago when he was still a student at the University of Nairobi. Right now, he has Tell- Em (a Public Relations firm) and TNS RMS East Africa (a research company), which jointly had ksh. 5.4 million in profits in 2019. His net worth is over Kshs. 660 million.

The ICT Cabinet Secretary currently stands as the 4th richest CS in Kenya. His wealth is about Kshs. 540 million. He was able to start accumulating his wealth when he became Google’s first Sub Saharan employee.

He is the Devolution Cabinet Secretary. He has been able to grow businesses and one of his major ventures is his law firm that was once able to represent Uganda’s president, Yoweri Museveni in a court case. His net worth is about Kshs. 420 million.

Keriako Tobiko is the Cabinet Secretary for Environment. He has heavily invested in agriculture z real estate and livestock. His net worth is about Kshs. 369 million.

HE is the Cabinet Secretary for Energy and Petroleum. His name has been lodged in various scandals in the industry and many people speculate that those could be the source of his wealth. His networth is approximately Kshs. 365 million.

He is Cabinet Secretary for Labor and Social Protection. He has been able to heavily invest in transport, real estate and livestock, building his current net worth to about Kshs. 314 million.

Peter Munya is the Cabinet Secretary for Industrialization.  He has been able to grow his wealth in agriculture, real estate and land. His current t net worth is approximately Kshs. 280 million.

She is the Cabinet Secretary for Lands and Physical planning. She has been able to grow her wealth in real estate, shares and agriculture. Her net worth is approximately over Kshs. 250 million.

Nviiri The Storyteller Biography – Career, Girlfriend, Songs and Net Worth

Nviiri The Storyteller Biography – Career, Girlfriend, Songs and Net Worth

Rhythm City Teasers 2020 all Episodes from January to December