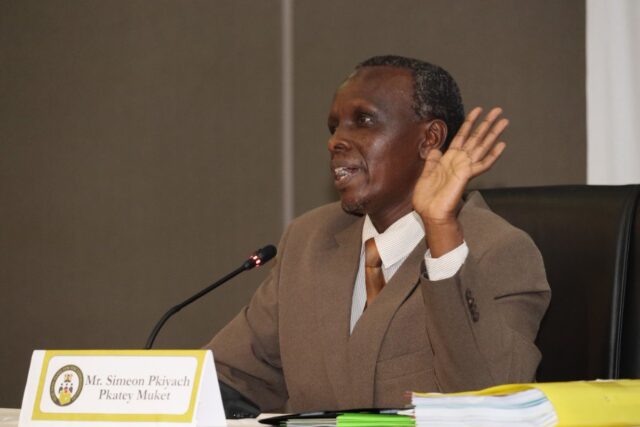 Simeon Pkiyach Pkatey Muket from West Pokot is among the last three candidates interviewed by the panel headed by Elizabeth Muli. The interviews held at the Kenyatta International Conference and aired publicly for all citizens to follow through were concluded on 22nd July 2021. The last three candidates that faced the seven-member panel were Zippy Nzisa Musyimi, Timothy Ole Naeku, and Simeon Pkatey. This article looks into Simeon’s biography highlighting his background, career journey, and IEBC interview.

Mr. Simeon Muket is from West Pokot County where he was born and brought up.

Simeon has vast experience in Agriculture and Livestock matters. Having been in the field for more than two decades, he has had a rich engagement with the people and thus has a good grasp of related matters. Additionally, Simeon Muket has been in the electoral process as a presiding officer. This is a role he has held in the past five general elections and as part of the interview process, he had to portray his mastery of the process, the commission practices, and more.

Moreover, Muket previously worked in the Transition Authority Kenya tasked with ensuring that the devolved governments introduced in the 2010 constitution would achieve the set success marks and targets.

Details on Muket’s personal life are unavailable as of the time of this article’s publication.

Sitting before a seven-member panel and before the entire country, Simeon was interviewed to identify his suitability for one of the four vacancies in the Independent Electoral and Boundaries Commission Board of Commissioners. He portrayed a confident and well-conversant individual who was able to respond to the questions by the panel accurately.

He went on to highlight what his contribution to the board and the commission as a whole would be should he land a seat vacated by Connie Maina, Roselyn Akombe, Paul Kurgat, and Margaret Mwachanya.