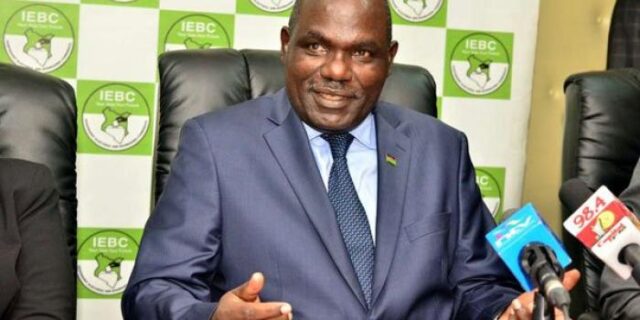 Wafula Chebukati – IEBC’s current boss is the subject of this article as we look into his biography, educational background, career journey, and personal life. Kenya’s elections regulatory agency, the Independent Electoral and Boundaries Commission (IEBC) established in 2011 is mandated with conducting or supervising referendum and elections to an elective body or office established by Law and other legal elections in Kenya.

Wafula W. Chebukati was born in 1961 and celebrates his birthday on 22nd December. He hails from Trans Nzoia County and later moved to Bungoma County.

Mr. Chebukati began his academic journey in St. Peters Primary School in Mumias where he excelled in his certification exams. Because of his success, he secured a place in Lenana School after Bokoli Secondary school. Chebukati later went on to join the University of Nairobi Law School in Parklands.

He spent four years in his undergraduate degree and two more in the Kenya School of Law as he built his Law career. Additionally, Mr. Wafula enrolled at the Jomo Kenyatta University of Agriculture and Technology (JKUAT) for his MBA.

Chebukati’s career spans over thirty years with specialization in litigation and dispute resolution, company mergers and acquisitions, maritime, conveyancing, and labor laws. The IEBC boss is the founder of a law firm named Cootow and Associates Advocates based in Nairobi and has been operational since 2006.

Chebukati also has a political background having vied for a parliamentary seat in the 2007 general elections to represent the people of Saboti. Chebukati lost in the elections and from then went on to resign from his life-long membership to Hon. Raila Odinga’s Orange Democratic Movement. Chebukati has since then affirmed his non-affiliation to any political party despite some analysts citing his likely bias towards the Building Bridges Initiative.

Chebukati took up his position as the IEBC chairman in 2017. He was placed in charge of ensuring that the country would undertake a free, fair, and credible general election. He worked with IEBC commissioners in the elections which later on had to be repeated for the presidential seat. Mr. Chebukati is currently tasked with establishing new systems and improving existing ones in preparation for the highly anticipated 2022 general elections.

Wafula W. Chebukati is an avid golf player being a member of the Kenya Golfing Society. He has also held leadership positions in the golf clubs of Nyali and Mombasa. The IEBC boss keeps details on his family away from the public and private. Mr. Chebukati is however married and has children.