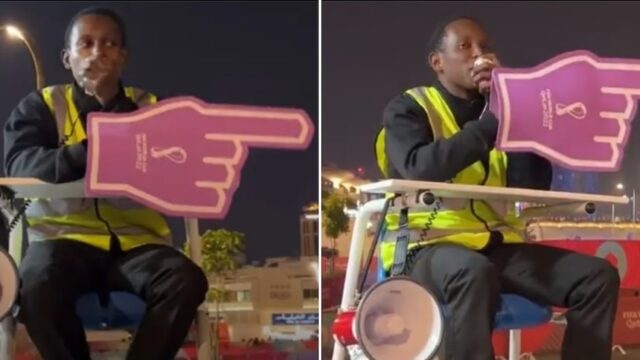 Abubakr Abbass aka the ‘Metro Guy’ alias ‘Metro Man’ rose to fame after his video went viral on Tiktok. In the video, Abbas was seen directing fans visiting the historic market called Souq Waqif – to the metro station nearby.

He was seen holding a foam finger and speaking into a megaphone, repeatedly saying, “Metro this way.”

His slogan excited fans making them to take selfies with him and joining his chants.

“We love him; we love the metro guy,” one fan said, motioning towards Abbass.

“I saw him on TikTok. I thought it was really funny. He makes me laugh; it’s such a simple task,” added a young fan dressed in a Chelsea football shirt.

Abbass aka the metro guy is 23 years old as of 2022. He was born in Mombasa, Kenya. He celebrated his 23rd birthday this year.

Securing a Security Job in Qatar

In September this year, the ‘Metro Guy’ applied for a security job for the World Cup when he saw an advertisement. He noted that he had always dreamed of going to a foreign country and was already armed with a passport while applying for a security job. Luckily, and Abubakar got the security job he applied for, but when he got there, he was told he would give fans directions.

“Thanks, guys for your support, we love you,” Metro Guy says in another video, where he is with friends.

Often wearing a reflector coat, perhaps for his job, the TikToker has been receiving love from across the world, and from Kenyans on social media as well.

His comment section is filled with Kenyans proudly commenting on the Kenyan flag.

In another video, the TikToker clarifies that when he says metro he means “a metro station in Doha.”.