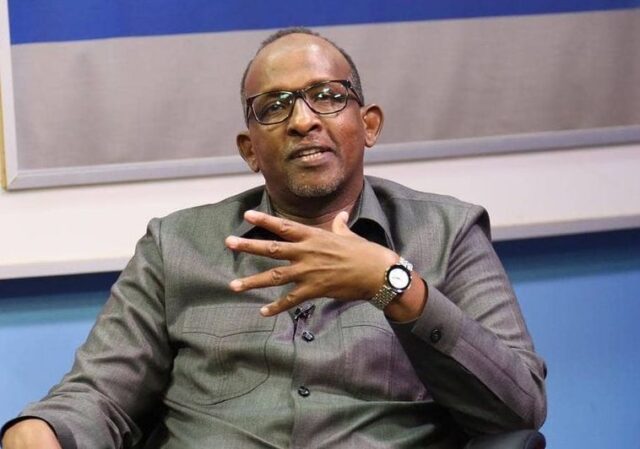 Aden Bare Duale is the current Cabinet Secretary for Defense, appointed by president William Ruto. He was the former Majority Leader of the National Assembly under the Jubilee party.

Aden Bare Duale was born in 1969 in Balambala in Garissa county. He originates from the Abdulwak of the Talamooge sub-clan, which is part of the Ogaden clan. Duale has a twin brother.

The politician holds a Bachelor of Education Degree from Moi University and an Executive MBA from Jomo Kenyatta University of Science and Technology.

Duale’s career kicked off in 1992 when he worked as a graduate teacher at Sankuri Secondary School. However, he quit after two months and went on to work as a clerical officer at the Garissa Provincial Commissioner’s office for six months.

He then joined their family business before joining Kenya Broadcasting Cooperation as a director from 1999 up to 2003. He is a co-founder and CEO of the Livestock Marketing Society of Kenya.

In 2007, Duale was elected as a member of parliament for the Dujis constituency under the ODM party ticket. He was appointed as an assistant minister of Livestock in April 2008. Until 2011, he served as the ODM National Vice Chairman in political affairs.

He is also co-founder of the United Republican Party. He is a die-hard supporter of president William Ruto.

Aden Duale is married to Farida Duale and together they have five sons.

Aden Duale’s net worth is not yet known. He earns most of his wealth from his political career.