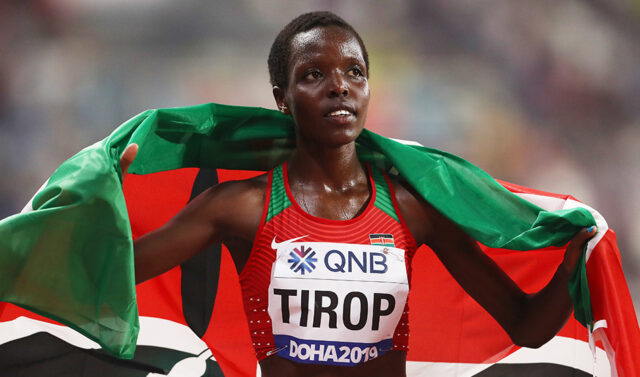 Agnes Tirop was a Kenyan athlete,  especially in the 10,000 meters, long-distance race. She represented Kenya in the 5000 meters women championships at the 2020 Tokyo Olympics. She is a record holder of various championships. Additionally, she won a medal at the World Junior Championships in Athletics and the World Cross Country Championships, just to mention but a few. This article reviews her biography.

Tirop was born on the 23rd of October 1995 in Uasin Gishu County.

Agnes won various medals such as gold, bronze, and silver in the different Cross-country Championships. She entered senior ranks in the 2015 season when she won the Eldoret Discovery Cross Country in Kenya.

Further making progress, Agnes represented Kenya in the 5000 meters race where she came fourth. In September 2021, she broke the world record in the 10000 meters women-only race in a record time of 30:01 seconds in Germany.

Her final race was the 2021 Valencia Half Marathon where she finished second in a record time of 30:20 seconds

Agnes Tirop Cause of Death

Agnes found her untimely demise on the 23rd of October 2021. She was found dead with stab wounds in her neck and abdomen at her house in Iten, Elgeyo Marakwet County. Neighbours told sources that arguments between her and her ex-lover might have caused the incident. She had come to pick her clothes when the fight ensued. Investigations and justice for her death are underway.