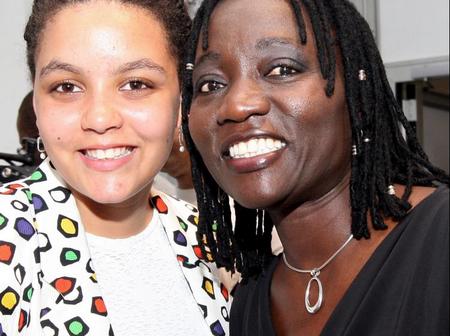 Akinyi Obama-Manners is a daughter to Rita Auma Obama – Former President Barack Obama’s older half-sister of British-Kenyan citizenry. She is passionate about the arts and culture following in her mother’s footsteps who is a journalist and author. This article looks into President Obama’s niece’s biography, highlighting her background. Education, career journey, and personal life.

Akinyi was born in 1997 to her parents Auma Obama and her father Ian Manners in England. Her parents however dissolved their marriage in divorce three years later in 2000.

She attended The Royal Alexandra and Albert School between 2011 and 2013 whereupon completion she attained her GCSE certificate. Akinyi then proceeded to The 6th Form College Farnborough for her A levels focusing on Art, Film, Design, and Literature subjects. In 2015, she enrolled at the University of Creative Arts attaining a Diploma in Art and Design – Foundation Studies.

Akinyi Obama-Manners has diversified experience having worked in various industries such as Customer Service, Apparel, Sales, Time Management, and Retail. She started off with a Fashion Design internship at Minx by Eva Lutz based in Germany, proceeded to a Sales Assistant role in Bentalls located in Bracknell, and then worked as a Telesales Agent for Zenith Canopy Structures Limited in Wokingham.

Moreover, she worked as a personal assistant at ARREY Berlin ensuring customer satisfaction and that all operations ran smoothly. Akinyi also took up some other jobs while living in Germany such as being a nanny and personal chef.

After relocating to Kenya, she became a Junior Facilitator at Sauti Kuu Foundation, where her mother is the executive chairperson. The foundation seeks to help the Kenyan young people and orphans who live in poverty. Obama-Manners concurrently works as a kindergarten trainee at Nice View Children’s Village situated in Msambweni.

The lass is passionate about culture, the arts, social justice, and children. She dedicates her time to use her array of skills and diversified experiences to teach children about their heritage and cultures.