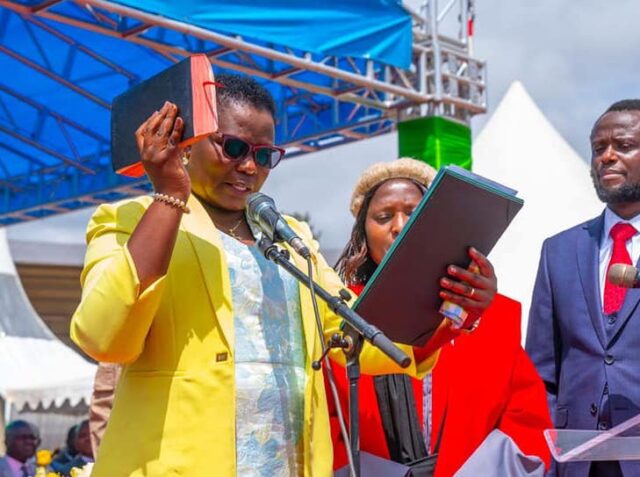 Kawira Mwangaza is a formidable woman in politics and Meru Governor who recently came into the limelight due to an impeachment petition raised against her by members of her county assembly.

Not much about her early life is known in the public domain as she rarely speaks anything of it. Born as Kawira Mwangaza in the year 1973 as her family’s second with five siblings.

She lost her father at a tender age and had to help her mother fend for the younger children.

This made her quite responsible as its said that she worked as a casual laborer on neighborhood farms and a domestic aide to a relative in her teen years.

Kawira Mwangaza claims to have studied at CCM Ontulili Primary School and progressed her education at Moyale Secondary School in the earliest of the nineties.

From here, she began her adulting life as a business woman and much later enrolled to study a Bachelors’ in Education at Kampala International College while pursuing a Certificate in Human Resource from Makerere University.

Her higher learning is cited to have culminated at her hometown’s Meru University in 2012.

Kawira Mwangaza is currently married to Robert Murega Rimberia, also known as Murega Baichu, who is a well-known musician as well as a pastor.

The two signed their nuptials at a vibrant ceremony in Meru in May of 2018 and share between them one child.

Many have praised Baichu for his incessant show of love to his beloved yet many more have disapprovingly blamed their current woes on the same.

Kawira Mwangaza political history has been marked in three milestones.

The first in 2013 when she unsuccessfully vied for Buuri constituency parliamentary seat where she lost to Boniface Kitobu.

The second in 2017 when she successfully vied for the Meru County woman’s representative position defeating Florence Kajuju. At the parliament, she was a member of the House Business Committee and Departmental Committee on Communication, Information & Innovation.

The third and most recent saw her vie for Meru County’s gubernatorial seat in the 2022 general election. She vied as an independent candidate and won the seat defeating Kiratu Murugi and Mithika Linturi (UDA). Having been declared as validly elected and gazette by the IEBC, Kawira was sworn in as the third governor and the first female of Meru County on August 25, 2022, at Kinoru stadium.

She recently faced a senate committee following an impeachment petition raised against her by Members of the County Assembly of Meru. They accused her of misdemeanors amongst them; nepotism, incitement, violence, violation of public finances and misconduct.

The senate committee chaired by Boniface Khalwale acquitted her on all charges and dismissed the impeachment motion stating that they were not substantiated.