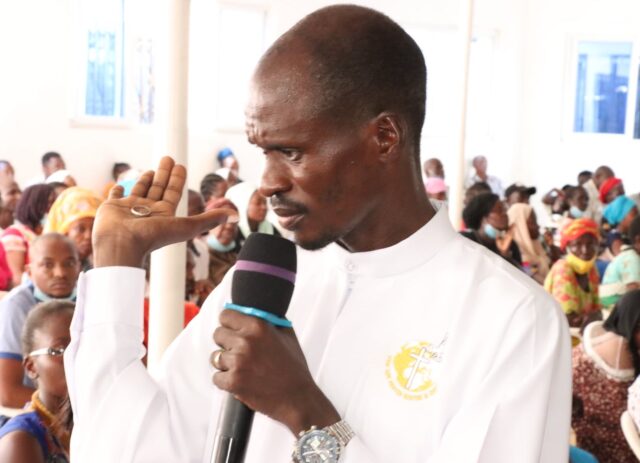 Evangelist Pastor Ezekiel Odero is the new kid on the block. He the founder of New Life Church in Mavueni, Kilifi. He has garnered a lot of following with his followers believing that he is a true man of God as per a number of miracles that he has been doing.

Pastor Ezekiel is currently in his mid 40s. He was born in Homabay County and currently based in the coastal region of Kenya, Kilifi County.

The evangelist began his career journey in Kisumu as a fisherman. He later relocated to Mombasa as a mason, where he also studied.

He gained popularity during COVID 2019 when most people were locked in their homes following preachings from televangelism pastors. His mentor has been Pastor Pius Mwiru of Maximum Miracle Centre, Nairobi. In several occasions, Evangelist Ezekiel has been seen having a service together with pastor Pius.

He began as an instrumentalist in the Pastor David Owuor’s Repentance and Holiness ministry. He used to play piano and violin during church services. During one of his services, Pastor Ezekiel confessed that he was once a fornicator who indulged in a lot of sexual sins.

Just like pastor Owuor, Ezekiel is very strict about dressing in his church. He is furthermore strict about ladies visiting his offices since he believes that he do not want temptations which may take him back to his old ways.

He recently moved his church from Shanzu, Mombasa to Mavueni in Kilifi County due to the upward growth of the church membership. This is because he wanted a larger space to construct a big church and other amenities to accommodate his growing big numbers.

At his new church compound, he has built hotels and international schools and many other amenities.

As witnessed in his church, he sells ‘Holy water’ to people from various denominations and different walks of life.  The water is believed to offer healing and protection.

He does a lot of fasting and he says that that is the reason for his slender body size.

He is an alumnus of the Technical University of Mombasa, formerly known as Mombasa Polytechnic.

His first love passed on several years ago leaving a son behind thought they were not legally married. He is currently married to Sarah despite resistance from some of his family members on grounds that she is uneducated.

The two ministers have been together for more than 13 years now and have children. They have been busy spreading the gospel across the globe, winning lost souls to Christ.

The main thing that disappointed some of his family members is the fact that Sarah was a class three dropout and therefore she couldn’t speak English.

“I looked at my wife and didn’t see English but a beautiful woman who can care for a ministry. English can’t take care of a ministry!” he said.

Despite all the challenges, Pastor Ezekiel saw a helper that he needed in Sarah.

The man of God added that he didn’t listen to his relatives’ opinions and went ahead to marry his soulmate.

“When I wanted to marry Pastor Sarah, some of my people told me ooh she didn’t go to school. she can’t speak English. what if you marry her and big people come what will they say? I looked at my wife and didn’t see English but a beautiful woman who can take care of a ministry. English can’t take care of a ministry!” he said.

Pastor Ezekiel is believed to be one of the richest pastors in Kenya. He plays low and has never mentioned anything to do with his net worth or wealth. He spends most of his money in the gospel by building the church.

This is evident in the big church that he is building at Mavueni in a massive compound. Rumours have it that it will be that biggest church in Africa since it is set to host more than 20,000 people per church session. It is believed that the man of God plans to build schools, hotels and other amenities in the same compound.