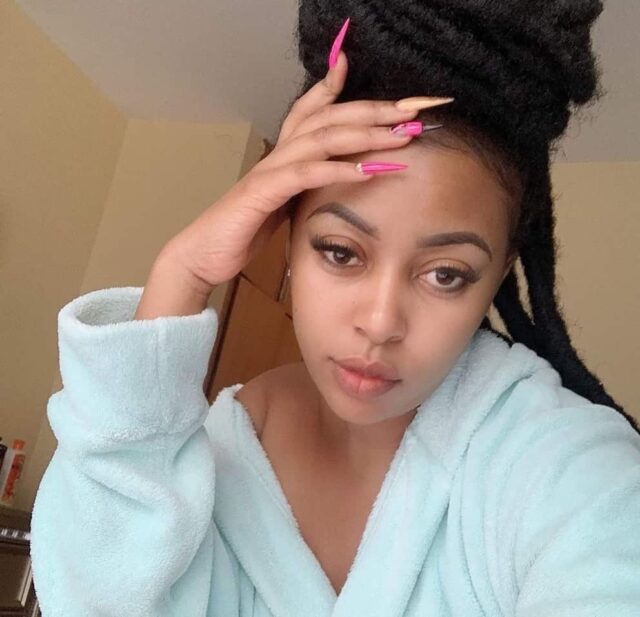 Socialite, actress and fashion consultant Amber Ray (born Faith Makau) is a curvaceous woman who has attracted the attention of many across the world especially on her social media platforms where she shares photos of herself living the larger than life. In this article, we look at the socialite’s biography addressing questions on her background and current situation.

Amber Ray was born on 3rd November in 1992 in Machakos County, Kenya. She has a sister whose name has been established as Judy. Her real name is Faith Makau while Amber Ray is her pseudo name that she uses on her social media platforms.

Information on Amber Ray’s educational background has not been determined as at the time of this article’s publication.

Her entrepreneurial ventures began when she tapped into her love for fashion and figured out an opportunity to monetize this. She additionally promotes her business herself by how she dresses and impresses her viewers. Talk about strategic marketing.

She created a business out of it which now earns her a decent income.

In addition to this, she considers herself a brand. She has taken time to build up her brand. Using this she endorses other brands and charges them quite an amount. This is because her huge following and fan-base who turn into viable customers and make sales from the endorsed brands.

Amber has mentioned in the past about a time her own father wanted to chase her away from home for calling off an arranged marriage a few weeks before her dowry payment was made. This highlights a tough and frictional relationship with her parents.

Amber Ray has dated in the past and in her relationships had a fair share of dramatic experiences. She is known to date wealthy individuals who include businessmen, politicians and big names in various industries. She has dated Brown Manzo, Syd, Brian Mwangi and got married as a second wife to a Kenyan politician named Jhanda Merlahi Zaheer.

Their marriage of three years was filled with much trouble as Amber Ray was accused by the first wife for practicing black magic / juju on her husband to wreck their home. She responded to these allegations that were accompanied with a picture of her in a place that looked like a witchcraft den saying that she was playing a character in a television scene. On the finalization of the divorce, Amber Ray expressed relief from the marriage that she said had taken a toll on her.

Amber Ray is a mother to one son whom she loves deeply as she shares photos of him often on her social media platforms. Her son is named Gavin from a past relationship and the two share a good relationship.

Amber Ray’s net worth has not yet been established at the time of this article’s publication. She however owns several assets including lavish cars, a posh home and her investment in showbiz.