Residents of Bungoma County especially those from sub counties other than Webuye East are on receiving end; lamenting about poor of service delivery from a county official who has been only keen on one constituency — Webuye East.

The lady in question has adamantly refused to deliver her duties and responsibilities as the Special Programmes Officer. She has maintained her political zero-grazing behavior within Webuye East constituency ignoring other residents in the expansive county of Bungoma.

The Governor entrusted her with the responsibility of addressing issues concerning calamities and disasters within the county but unfortunately she has decided to focus on a single constituency for political mileage and partisan interests.

Bungoma residents have raised concerns about the education qualifications of the lady who is serving as
the Special Programmes Officer of Bungoma County. She is a woman of average education and many are shocked how such a lady was entrusted with that responsibility in the county.

Her poor sense of judgement and careless politicking are some of the key pointers to her low level of learning. She cannot
differentiate between her responsibility as a county official and her personal interests in politics. Bungoma residents felt taken for a ride.

The lady politician was running a bar within Bungoma county before her appointment as a Special Programmes Officer. Her sole interest has been always getting sponsors to finance her projects. This led her into stealing the husband ( a rich man) of a certain poor woman.

READ:   Outcry as Deputy Governor Gives Jobs to Relatives and Cronies to Serve in the County

Currently we are reliably informed that she enjoys some dalliance with a senior county official who’s currently paying her bills in exchange for sexual favours. Now that most of the charity works are not funded by the county government, it leaves more questions than answers.

The officers close to the county chief who are keen on his reelection are pushing the boss to show her the door due to conflict of interest and self-centered unnecessary campaign. Bungoma residents are on tenterhooks waiting for the governor to issue a statement on the same.

The resources obtained from the county meant for the vulnerable in society are channeled to opinion leaders and social media spin doctors who pretend to have a say in politics. The reason behind is the lady preparing herself to vie for the Webuye East constituency seat.

The vocal lady uses young men (and some overgrown children of circumstances with overflowing paunches) to propagate her agenda. The young men around are given paltry handouts and cheap food from soup kitchens as a reward for social media publicity. 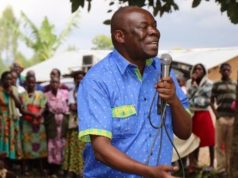