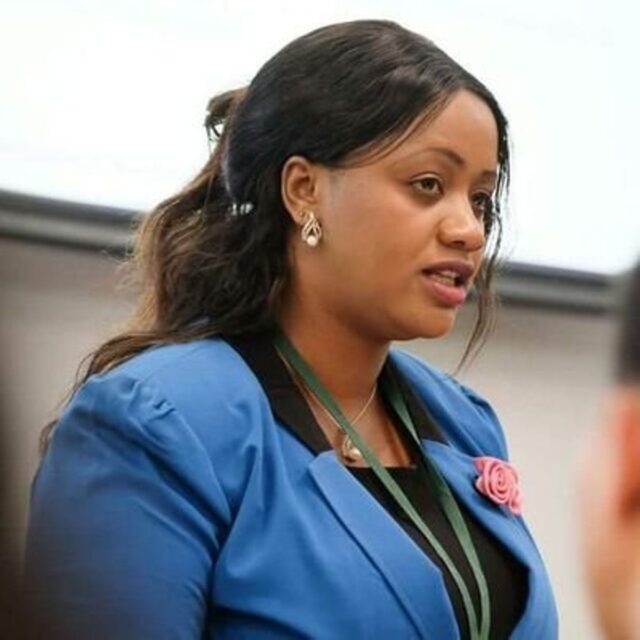 Cate Waruguru, Laikipia County’s Women Representative, is known as “Mrembo wa Laikipia” among her people. She is a successful politician who grew up in tough conditions under the care of her grandmother. This article looks into her biography highlighting her background, education journey, career, and personal life.

As of 2022, Catherine Waruguru is aged thirty-four and was born in Kenya’s Central region raised by her grandmother. Her grandmother brought her up to be the lady she is today and she is always keen to make that known to everyone she can. Moreover, she is named after her grandmother called Catherine Wandia.

Talking about her grandmother, the Laikipia woman Representative says, “My grandmother is my greatest pillar. She taught me that I could be anything I wanted to be – married or not, from whichever background. She taught me that I did not need money to be successful. You need an idea that works, a clear mind, and to make people believe in you. They will invest in your idea.”

Cate says that she only remembers meeting her mother, Waruguru Beatrice, in 1995 and 2003 just two days before she passed away.

She is an alumnus of Nyeri County’s Kanyama Secondary School before she joined Karatina Institue of Technology in 2007 studying Theology. This made her grandmother believe she would one day become an evangelist not knowing the changes to come about in a few years. In 2010, she enrolled for a Management Diploma at the Kenya Institute of Management setting ground for her undergraduate degree in Business Management at Karatina University graduating in 2016. Not stopping there, Cate Waruguru is currently pursuing her Master’s degree in Management and Innovation at the Kenya College of Accountancy.

Cate Waruguru served as Nanyuki Zone Access Kenya’s manager. Access, with head offices at Westlands, is an indigenous internet service provider company. This was until 2013 when she was nominated by the Jubilee Alliance to the Laikipia County Assembly making her among Kenya’s youngest nominated MCAs. Four years later, she vied and won the Laikipia Women Representative seat.

Commenting on her progress in an interview, Cate said, “Being a young woman with no godfather and no money and yet winning the woman rep position in 2017 was one of my happiest moments. From being a nominated MCA to getting elected – I was so young – out of 13 women.”

Her political career has seen her show up as a bold character seeking the betterment of the civilians’ lives. She is backing a cancer bill that will make Kenya’s cancer treatment affordable. Moreover, she established the Fanikisha Youth Program seeking to equip the youth with skills in training institutes. Shifting her allegiance from the Deputy President’s tangatanga team to President Uhuru Kenyatta’s, she had this to say of the former, “We have been busy going round doing harambees and going to churches.

In some cases, what was promised is not delivered. When I accompanied Ruto to Laikipia he promised several buses to schools and we are still waiting for them. Other regions are busy doing development projects and I have decided that I will not take my people to the Opposition,” she quoted by the media.

Cate is Kiprotich William Kiget’s second wife and is the mother of two children with the lawyer. The couple made it to the headlines when Kericho’s Sunshine Hotel denied them access to a shared room after which she promised to sue the facility for discrimination and humiliation. Speaking to KTN’s Gitonga Michael on her polygamous marriage, she said, “I will challenge my good friends. Most of them I know they are married and they have their marital wife or husband but wako na mpango zao. You will realize that I am better off if I know this is the man that I want to be with. I would like anybody to challenge me and tell me whether or not I am casted to go to hell because I am married as a second wife.”