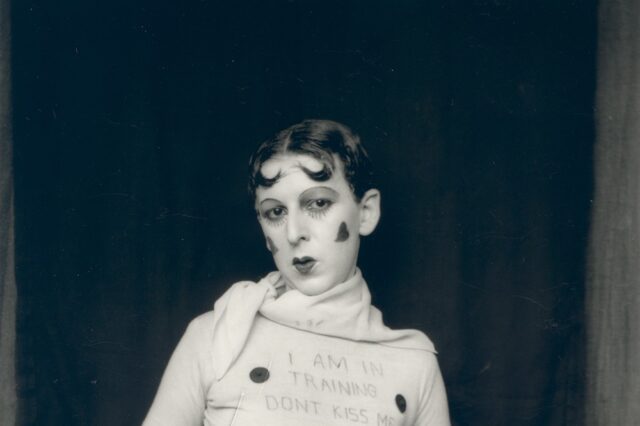 Claude Cahun, whose real name was Lucy Renée Mathilde Schwob, was a French photographer, Surrealist, writer, and performance artist who was among the earliest artists to explore sexuality and matters of gender. Her photographs were included in a 1986 exhibition of Surrealist photography. She is most famous for her self-portraits that revealed her gender ambiguity.

She was born on 25th October 1894 in Nantes, France to an opulent family. Her father was the owner and publisher of the regional newspaper called Le Phare de la Loire from 1876. Claude’s mother was mentally ill and ended up in a mental institution in 1898. She then went to her grandmother’s, Mathilde.

Claude’s father sent her to school in England in a bid to protect her after her early exposure to anti-Semitism. She went back to France in 1909 where she met Malherbe Suzanne, her stepsister, and a lifelong friend and collaborator.

She did her first self-portrait in 1913 which marked the beginning of her lifelong obsession with examining gender using herself as the subject. Working with her stepsister Malherbe who would then change her name permanently to Marcel Moore for her artistic works, they were able to produce several successful projects such as Vues et visions – Views and Visions. She would also make contributions to the literary journal Mercure de France.

Her career journey saw her reconceive the lives of several fictional, mythological, and biblical female characters such as Delilah, Judith, Cinderella, Helen of Troy, Salome, and Sappho. These stories and pieces would then be published in the Mercure de France journal that secured her works. Cahun was also a reviewer on other writers’ works such as those of Adrienne Monnier, Pierre Benoit, and André Gide.

Claude Cahun joined the Association des Écrivains et Artistes Révolutionnaires (translated to Association of Revolutionary Writers and Artists) in 1932. It was during this period, she met Surrealists founder, André Breton who described her as “one of the most curious spirits of our time.” She would then closely align herself with the movement making significant contributions to the Surrealist movement.

She did her artwork for herself and was never one to go after fame. In fact, it was until forty years after she passed on that her work gained its fame. Lucy’s work was intended to redefine reality and society’s perspective on where boundaries lay. She passed away at the age of sixty on 8th December 1954 in St. Helier, Jersey.