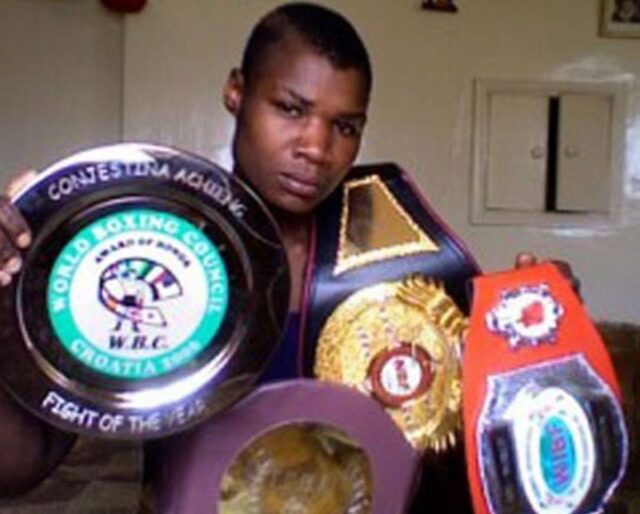 Famously known as Conje, Conjestina Achieng has been a household name in Kenya since the 2000s as she emerged as a novel character – a Kenyan female boxer.

Many children and adults alike looked up to this star and supported the home grown and indigenous talent. In this article we look at the life of Conjestina and what has conspired since then to date.

The 43-year-old mother of one was born on 20th of October in Yaya, Siaya County as a fifth child in a family of ten children.

She was born to father, Clement Adalo a medic and mother Gertrude Auma with whom she lives with as at now.

Conjestina Achieng attended St. Jesus Primary School in Siaya for her early educational years and this is where her interest in sports took a firm hold. She played football in school and said she remembers those days and times fondly. She then discovered boxing via her elder brother Joseph Kusimba and was hooked to the sport and began building her interest step by step.

Her brother Joseph Kusimba was greatly instrumental in Conje’s career as a great inspiration to taking up the art professionally. She began taking part in boxing matches 2 decades ago, in the year 2000. Two years later, she went on to launch her first professional debut on the eighth day of June, 2002 in Nairobi County and won in a four round decision knocking down her opponent at a 0-2 score.

Over her active 7-year career journey from 2002 up to 2009, Conjestina Achieng boxed in Kenya, Tanzania, Germany and Sweden facing against opponents from across the globe including Laura Ramsey from the United States of America, Janaya David from Atlanta, Georgia, Ugandan Florence Nalukwago, Zimbabwean Monalisa Sibanda, Tanzanian Monica Mwakasanga, Swedish Maria Lindberg and Yvonne Reis from Florida.

Conjestina Achieng had been preparing and anticipating a match with the worldwide boxing star Laila Ali though this was not realized in her career.

Conjestina has bagged several accolades and in her career of 27 matches, she won 17 of them, lost in 6 and had 4 draws. This was incredible performance.

Conje was also ranked the fifth female boxer in the world.

Conjestina Achieng is a single mother to a son, Charlton Otieno who is now 24 years old. There have been rounds on social media about an impostor of Charlton who has been swindling unknowing Kenyans of their money claiming that he needs it in support following Conjestina’s illness. The impostor conned several people including Governor Anyang Nyong’o. He has however been unmasked.

Conjestina got I’ll following several frustrations such as the inability to pay up rent and she felt that she was not getting the recognition and rewards that came with her work. She is said to have spoken on how hard the industry was and the pressures of the same. She was hospitalized a while ago at Mathari Hospital in Nairobi dealing with mental health issues and released later on.

She is now at home in Siaya living in a humble hut said to be dependent on addictive substances. Her mother Gertrude Auma has spoken of their neighbors treating them unkindly because of Achieng’s condition.

They hope that they will be able to treat her and provide her a chance to put her drawing and painting and especially boxing skills into active use.

Conjestina Achieng Net Worth and Endorsements

Her current net worth cannot be determined at the moment, based on the conditions she is living in. She also do not have endorsements at the moment. This information will be updated as soon as it will be available.