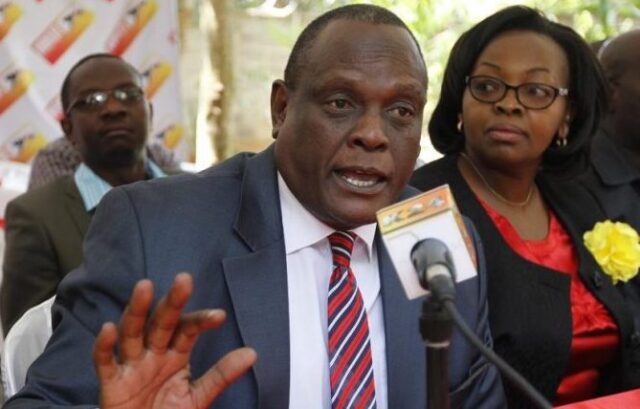 David Murathe has been in the Kenyan politics for a good number of years and as one of the President’s most trusted and closest allies, he is a man of interest. He is also an open critic and not a fan of the Deputy President, Dr. William Ruto. Murathe has openly shown his disapproval for Ruto’s presidential candidacy come the general elections in 2022.

The Jubilee party vice chairperson has come off to many as the one key character in fueling the misunderstanding between the president and his deputy. This article brings forth his biography highlighting his personal life, political career and background.

David Wakairu Murathe was born in 1958 and his father William Murathe Gatuhi was a well-established entrepreneur in Nairobi who passed on in 2007. He owned and ran the Murathe Wines & Spirits, a well-known business across the city.

After David Wakairu graduated from college, he vied for the Gatanga MP seat and won electorate favor against all his rivals in the 1997 elections. Murathe is often remembered for his resignation from the seat under rumors that he sold the seat to SK Macharia, one of his then rivals, at a Ksh 10 million price, an allegation he has denounced. He however retreated to the MP seat and in the next general elections lost the seat.

His close comradeship with President Uhuru is traced back to 2007 when the president worked as the Finance Minister and the two forged a friendship solid to date. David Murathe is a chief ally of the president and he currently serves as the Jubilee party vice Chairman overseeing all party affairs in his capacity.

David Murathe is married to Mrs. Faith Murathe with whom they have two daughters, June Tuto, a fashion designer, and Waturi Murathe, a research analyst. In 2005, his personal financial life was at a critical point when he found himself in a debt burden of over Ksh 50 million with creditors fuming down his neck. He filed for bankruptcy to secure himself and worked his way back. He is said to be in the facilitation and brokerage business working as the Chief middleman nationals and the Kenyan government in huge projects that bring in billions in revenue.

David Murathe Net worth and Assets

David Murathe makes billions in his deals between the international parties and Kenya alongside his businesses. He resides in the lavish Garden Estate and is said to own some lettable property within the same area. His exact net worth is yet to be established and information detailing his asset portfolio remains unavailable to the public.