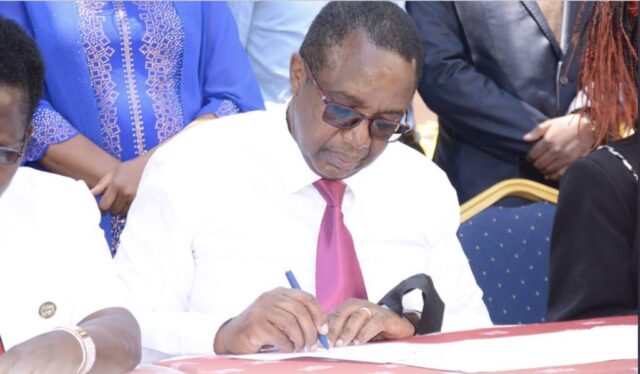 David Mwaure is a Kenyan lawyer and politician. He is the founder and flag bearer of Agano party, which was founded in 2006. He is a presidential candidate for Kenya’s 5th election to be held on August 9th, 2022.

David Mwaure Waihiga was born in Kenya. Further details about his date of birth, birthplace, and primary as well as secondary education are not known. However, Mwaure completed his high school education and joined the University of Nairobi where he pursued law and graduated in 1981 with a law degree.

He furthered his education and joined the International Leadership University for his master’s in leadership. He is currently pursuing his PhD in leadership.

After graduating from the University of Nairobi, David Mwaure started his career as a lawyer almost immediately. He later founded Mwaure and Mwaure Waihiga Advocates, which is a law firm in Nairobi, with offices in Lamu. This was years after he had initially started practicing law.

Mwaure has been practicing law for over 35 years and is a Senior Counsel in Kenya.

Mwaure founded the Agano party in 2006, with the aim of promoting development, a servant-leadership of vision, integrity, professionalism, and excellence. However, the party didn’t produce a presidential candidate in the 2007 general elections.

In 2011, Mwaure contested for the Kamukunji Parliamentary seat using the Agano party ticket. This was after the High Court nullified the election of MP Simon Mbugua due to malpractices in the 2007 elections. However, Mwaure lost the by-election.

Mwaure had publicized his intention of running for presidency during the 2013 elections. He however changed his mind and decided to run for Lamu gubernatorial seat instead. Unfortunately, he lost the gubernatorial seat.

The politician later applied to become a supreme court in Kenya. The Judicial Service Commission went ahead and held an interview with him, but then rejected him for the position. In 2022, Mwaure also applied for a court of Appeal judge position but failed to get it.

In 2021, Waihiga went ahead and tried to get the Nairobi Gubernatorial seat which was left vacant after Governor Mike Mbuvi’s leave. He however never got the chance to be elected as the race never went to the ballot.

Mwaure is currently running for the 2022 presidential seat using his Agano party ticket. This is the second time he announces his interest, and his running mate is Ruth Mucheru.

While there are no exact details on David Mwaure’s net worth, he earns most of his wealth through his law and political career.