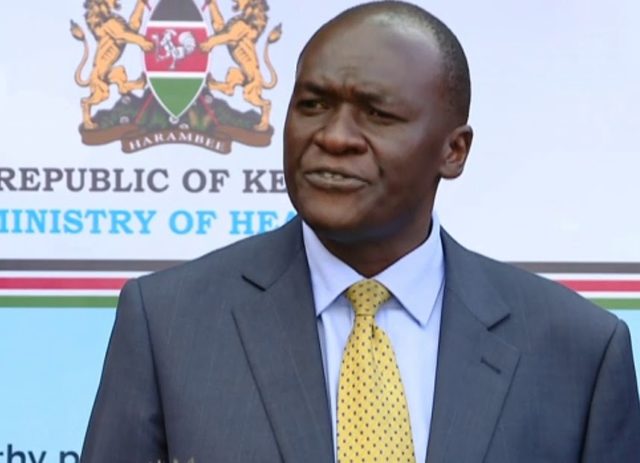 Dr. Patrick Omwanda Amoth is the current Ministry of Health acting Director General in Kenya. He was appointed by the Kenyan President His Excellency Uhuru Mwigai Kenyatta.

Currently, Patrick has not put any in formation regarding his age in the public domain. This article will be updated as soon as possible for updates on his real age.

He is a medical doctor with a Master of Medicine Degree in Obstetrics/ Gynecology from the University of Nairobi.

Patrick Amoth has been on the front-line in trying to ensure that Kenyans are informed about the ongoing Corona virus pandemic. Just when the virus has kicked in Kenya, he did his best in ensuring that the laboratories at the national health laboratories had sufficient kits and requirements and were ready to test samples for the Corona virus.

By 17th March 2020, there were 20 patients at the Infectious Disease Unit, most of them who complained of poor sanitation, lack of communication and delayed tests. Some patients even packed their bags and threatened to storm out.

The situation has since been handled in a better way. The major complaint right now is from the general public, with Kenyans lamenting how the government has abandoned them in this difficult time.

Since most of them have no source of income now, they are forced to sleep on empty stomachs with some even being kicked out of their houses for failing to pay rent. They claim that the government has turned a deaf ear to them at a time they need its help the most.

In August 2019, Ms Sicily Kariuki, who was the then Health Cabinet Secretary, moved officials to new ministry dockets. This saw Dr. Patrick Omwanda Akoth being positioned as the acting head of the proposed Department of Public Health.

He ended up replacing Dr. Kepha Ombacho who had had his name on controversial topics about his position and career. There had been claims stating that the Public Health and Environmental Health Professionals claimed that he had been in office without a formal appointment letter. This happened after he had officially retired on 29th November, 2017.

Apart from Amoth, other officials that were assigned other dockets include Dr. Pacifica Onyancha who was placed as the acting head of the proposed Department of Medical Services and Preventive and Promotive Services, John Wekesa Masasabi who was placed as the acting director general in the Ministry of Health, Jackson Kioko who was moved to the Kenya Health Professional Oversight Authority as the Chief Executive Officer (CEO).

Patrick Amoth Family and Net Worth

Patrick is a family man though he has not yet disclosed his personal life or published anywhere. Keep checking as we will work around the clock to update this article. His estimated net worth is approximately over Kshs.25 Million (non-official figures)