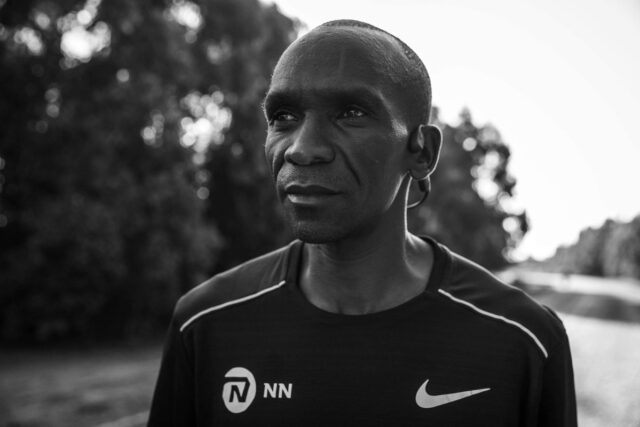 Eliud Kipchoge has defended his title at the Tokyo Olympics 2020 marathon by attaining another gold medal. This article looks into the story of the man celebrated around the world for his ‘No Human is Limited’ phrase highlighting his background, career, and personal life.

Kipchoge was born in Kenya’s Nandi District on 5th November in 1984.

He attended his academic training in Nandi where during his early years had to run to and from school until he got used to running.

His athletic journey began in 2002 as a long-distance runner at the IAAF World Cross Country Championships. He participated in the 5000m races and won third place at the Athens 2004 Olympic Games and second place in the Beijing Olympic Games. Marked with high achievements and successful experiences, Eliud Kipchoge’s career has been one Kenyans are globally proud to be associated with. He is described as the greatest marathoner in the modern era and holds the world record of 2:01:39 in 2018.

In the ongoing Tokyo Olympic Games, Eliud Kipchoge defended his gold medal eliciting celebrations across the country and in the world.

After making history as the only man to ever run a marathon under two hours, he worked with other companies and firms in endorsements such as Toyota and Absa Bank. moreover, he was honored with the Elder of the Golden Heart recognition by the president.

Kipchoge is married with three children. He describes his wife as highly positive about the career he chose in athletics. He has to stay in a dormitory with other athletes who camp together and train at the center with a single focus. The camp was set up by Patrick Sang who noticed Kipchoge’s talent and led him to tap into it. The athletes there live a strictly formal routine that they adhered to religiously. All their focus is put on running and honing their skills in the various games they play. These include short-distance sprints, marathons, relays, and hurdles.

The community at the camp is highly structural as well as having the positions of presidency and committees all established democratically through voting. Kichoge is described by colleagues as their leader and role model. This is always against Eliud’s preference for a quiet and normal life among his peers. He portrays this leadership by showing them the ways they should follow by doing his part of cleaning assigned to him.