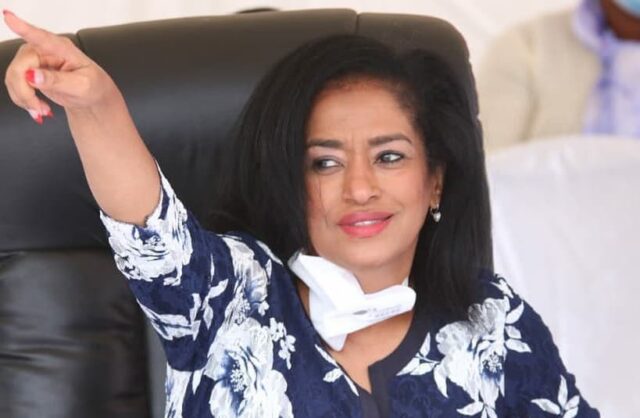 Nairobi Women Representative, Esther Wanjiru Passaris, is a seasoned business woman, politician, philanthropist and activist. She is among Kenya’s most renown women leaders and has not been short of controversial debates surrounding her. Many often wonder what tribe she hails from, if she is Indian and more questions regarding the politician. This article seeks to provide these answers and avail further information on Esther Passaris in her biography.

Esther Passaris is 57 years old as of 2022. She was born on 20th October, 1964 in Kenya’s Mombasa County to a Greek father and Kenyan mother from the Kikuyu community. She spent her formative years in Mombasa attending primary and high school there.

“My father. At 79, still being able to try and lift weights and cycle, with the help of your fantastic physiotherapist Eric and nurse aide Nelly and all the family that stands with you when I can’t be there. I celebrate you as being the first Kenyan of Greek origin who built a ship in Mombasa and for the many young lads you mentored as a football coach,” She wrote during International Fathers’s day.

She studied at the Aga Khan institutions – primary and high school- before enrolling at the United States International University – Africa in studying International Business Administration. She further pursued a Diploma in Law at the University of London and later an Advanced Management Program at Strathmore University in Nairobi.

On graduating college, Esther Wanjiru went into social work advocating for women and children rights in several campaigns and addressing community needs. She has made donations to several children homes and homes for the aged. In 2013, she went into the political arena seeking the Women Representative’s seat in Nairobi. She lost the election to Rachel Shebesh who had more electorate votes. She competed for the seat again in 2017 winning this time round and continues to hold the seat.

Esther Wanjiru is a highly trained and experienced sales and public relations expert having worked at several companies under employment and self-employment. She founded Sharper Images Limited doing brand promotions, marketing and offering sales services. She also holds under her belt experience as a sales and marketing manager at Nyali Beach where she worked for a few years handling such commercial affairs building revenue.

Beyond politics, she is a seasoned social entrepreneur and is well known among business circles. She established the ‘Adopt a Light’ organization which was an independent initiative to upgrade and improve the city’s street lighting systems beefing up security. Passaris founded and leads a campaign tagged ‘One in a Million’ which seeks to shed light on some of the highest pressing issues in society. Matters of lack of job opportunities, underdevelopment and poverty are among the top issues addressed by ‘One in a Million’.

Esther Passaris Wanjiru Rosanna is a mother of two children, one of whom is a celebrated musician – Makenna Ngugi, whom she had with her husband Pius Ngugi.

The couple’s relationship has been faced by several challenges including the two filing lawsuits against each other on domestic grounds. In 2003, Passaris filed a case against Ngugi for breach of promise to marry legally claiming a Ksh 200,000 monthly allowance to cater for the kids and a vehicle to make their attendance to school easy.

Pius Ngugi counter-sued in 2011 alleging that Passaris was asking for more financial resources after settling the matter eight years prior in court. Esther Passaris has publicly talked of Mr. Ngugi’s extra-marital affairs having children with other women saying she does not mind supporting them when need be.

Esther Wanjiru Rosanna has bagged awards on account of her achievements in social work and business. These include the Order of Grand Warrior (OGW) awarded by H.E Mwai Kibaki in 2008 and has been named among the most influential women in business and government.

Esther Passaris’s net worth is yet to be certainly established and information detailing assets she owns remain unavailable to the public.