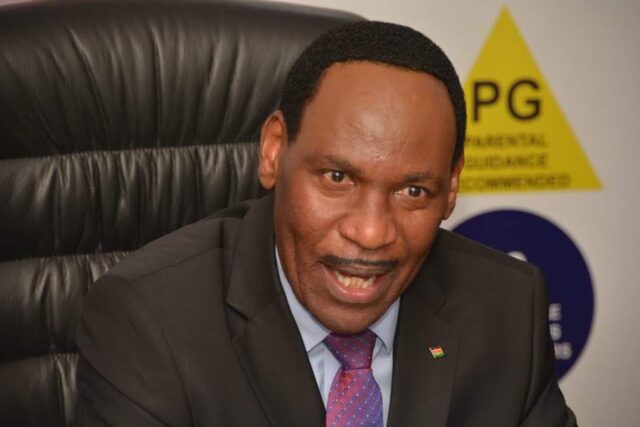 Ezekiel Mutua who is widely known as Kenya’s moral cop has been ousted and immediately replaced in his post of Chief Executive Officer of the Kenya Film Classification Board. The news came after he had been a day before trashing on such allegations terming them rumors. This article looks into Mutua’s biography highlighting his background, career journey, personal life, and more.

Mutua was born in 1967 and hails from Kaloleni in Mwala. His parents were actively participating in the local economic activities of the time such as brewing traditional liquor. He was born in a family of eleven children.

He is an alumnus of Taita Hills High School where he did his Kenya Certificate of Secondary Education (KCSE). Upon completion, Ezekiel Mutua enrolled at Kenyatta University where he pursued a degree in Sociology and Linguistics.

At the same institution, Mutua pursued a graduate degree in Communication and after graduating with his degree went on to the postgraduate level.

Mutua’s career began at the Nation Media Group in the position of trainee reporter and later on sub-editor. He was then appointed secretary at the Kenya Union of Journalists in 2001. Six years later he made his way into the government as the Director of Information and Public Communication and later on as the Information Secretary.

His latest role was at the KFCB serving to ensure that the media only broadcasted all-age sensitive and protected minors from drugs and substances, foul language, and pornographic material. Ezekiel Mutua’s reign from 2015 to 2021 shall always be remembered for the intensive measures he took to ensure that this mandate was accurately delivered.

Some of these included rated musical pieces, almost-nude photographs shared by Eric Omondi on his public page, a Durex condom advertisement, and a Coca-Cola advertisement showcasing people in a kissing position. Moreover, Alvindo’s Takataka, Diamond Platinumz’s Tetema, and Wamlambez Wamnyonyez were cut out of public airing. Movies and films such as Rafiki, Wolf Wall Street, and 50 Shades of Grey were also banned in the country.

Jane Mutua is an educational advisor who worked with UNICEF. Together, the couple is blessed with two sons.