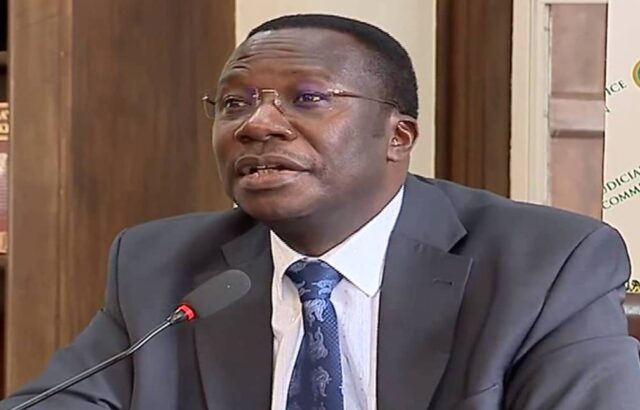 Justice Smokin Wanjala is a judge at the Supreme Court of Kenya appointed in 2011. He is the current director of the Kenya Judiciary Academy (KJA). Justice Wanjala is among the seven judges set to hear the 2022 August election presidential petition.

Smokin Charles Wanjala was born on June 22nd, 1960 in Machakos, Kenya. There are no further details on his early life, parents, family, as well as primary and secondary education.

Between 1986 and 2004, Justice Wanjala served as a Law Lecturer and Senior lecturer at the University of Nairobi. During this time, he also worked as the Joint Secretary to the Commission on Ilegaly and irregularly Acquired Public Land (the Ndung’u Commission) in 2003.

He was the first chairman of the Public Complaints Committee on the Environment (PCC), which is one of the Compliance Committees of the National Environment and Management Authority- NEMA between 2002 and 2004.

In October 2004, Justice Wanjala was appointed Assistant Director of the Kenya Anti-Corruption Commission (KACC), where he served until 2009. In 2012, Justice Wanjala received the presidential award of the Chief of the Order of the Burning Spear (CBS) [First Class], the 4th Highest Civilian Award in Kenya for his distinguished service rendered to the Nation.

Justice Wanjala is also an author with many publications including books and articles on the law sector.  He has also participated in major research projects and is one of the four founder members of the Center for Law and Research International (CLARION), where they pioneered civic education in the country.

Smokin Wanjala was appointed to be a Supreme Court judge in June 2012. In September 2017, he was among the four judges who voted to nullify President Uhuru Kenyatta’s win in the August 2017 presidential election.

Justice Wanjala is married to Susan Nyamoita Barongo. They have been together since December 18, 1993, and have two children together, Dean Wanjala and Nina Wanjala.

Justice Smokin Wanjala’s exact net worth is not yet known. He earns most of his wealth through his law career.