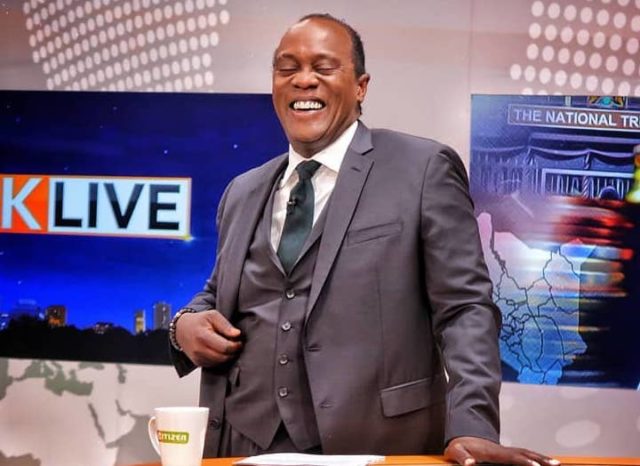 The award-winning jeff was born on 7th January, 1966 in Kiambaa village, Kiambu county, Kenya. He is currently 56 years old. Jeff hails from the Agikuyu community of Kenya. His hometown is at Banana, Kiambu, central, Kenya. He gets to celebrate his birthday on the 7th of January of every year.

Jeff Koinange was born to Fredrick Mbiyu Koinange (father) and Hilda Wambui Koima (mother) on 7th January, 1966. His father died when he was only 2 months old. His uncle, Mbiyu Koinange, played a huge role in his upbringing. Jeff is married to Shaila Koinange and together they are blessed with a son who they named Jamal Mbiyu Koinange.

Between 1987- 1989, he went to Kingsborough Community College in Brooklyn, New York where he graduated with an associate degree. He then went to New York University where he received a Bachelor of Arts degree in broadcast journalism.

His first leg into his career was when he worked at Kenya Television Network (KTN), which is Kenya’s first independent television channel. Between 1995- 2001, he worked for Reuters Television where he covered Africa. He was promoted to their Chief Producer in 1999 to 2001. Jeff then worked at ABC News from 1991- 1992. In 1994, he worked for NBC News as a producer. It was at this juncture that he went to work for the coveted CNN.

While at CNN, Jeff worked as the African Correspondent of the network where he covered a lot of African crises such as the civil wars in Liberia, famine in Niger, the crisis in Darfur and civil wars in Sierra Leone. He won an Emmy Award for his good work covering these stories. For out of Africa, he has been able to cover the Iraq war as well as the Hurricane Katrina crisis. Jeff Koinange stopped working for CNN on 29th May, 2007 after CNN Network announced his exit.

In December 2008, Jeff Koinange was hired as a news anchor by the Kenyan K24 TV Station. He started doing test runs almost immediately, where he hosted the Capital Talk Show on K24 TV.

He is currently married to his long-term eye candy, the Kenyan- Asian beauty known as Shaila Koinange. The two met in 1986 while auctioning to be flight attendants for Pan American World Airways.

They tied the knot in 1998 after being forced to postpone their wedding due to the bombing of the US Embassy in Nairobi by terrorists. Jeff had earlier on been married to a lady from Panama known as Sonya. Sonya was his first wife. The two parted ways in 1994.

Jeff and Shaila were blessed with a son known as Jamal Mbiyu Koinange. Jamal was conceived after a nine- year struggle. They had tried several of conception with none fruiting. They were at the edge of giving up when the two met Jimmy Monclus Maleketa, who is a half- Spanish half Congolese friend who they met in Lagos.

Jimmy suggested that they try invitro- fertilization (IVF) at a well known fertility clinic in Barcelona, Spain, which they did. Barely one month later was Sheila pregnant. Jamal was born in South Africa.

Jeff has an autobiography known as ‘Through my African Eyes’ that was published in 2014 by Footprints Press Kenya. He gets to share his two- cents on a number of topics on this side ranging from childhood to career. He also shares some intimate bits about his life and his journey here.

On 6th April,2020, Jeff Koinange’s home worth over ksh.130 million was auctioned by a firm due to his failure to settle accrued debts. The advert was placed in the local dailies, inviting those interested in the two parties to submit their interest, where the bidding deposit was ksh.5 million in cash or banker’s cheque. The property is to be auctioned on 28th April, 2020.

In December 2019, a car similar to Jeff’s was involved in a road accident along the Northern bypass. The car was a Mercedes Benz G- wagon that had a collision with a lorry. This caused panic, with people trying to reach Jeff on whether or not he was the one involved in the accident.

Jeff came out to deny the claims stating that he was the one involved in the accident since at that exact moment, he was on his way to Baringo to give an early Christmas to the Baringo Dancing Trio who had gone viral on social media. It was later made known to us that it was Shaffie Weru, a Kenyan radio presenter whose car was involved in the said accident. Shaffie Weru and Jeff Koinange’s cars are more or less of the same model.

You can check out his website www.jeffkponange.co.ke for details. He is also an active user of social media pages as “Koinangejeff”.

Jeff is one man who has drenched in sweat for his hard- earned money. He currently lives lavish, thanks to his hard work. His current net worth is about Kshs. 500 million. He once gifted Jalang’o a wrist watch worth Kshs. 3 million.

Jeff owns a fleet of expensive cars, one of them being the coveted Mercedes Benz G- class that costs over Kshs. 10 million. He also wears a Breitling for Bentley watch that has straps made of real crocodile skin. He also smokes Partagas Series D Cuban cigars that are worth about Kshs. 500,000.