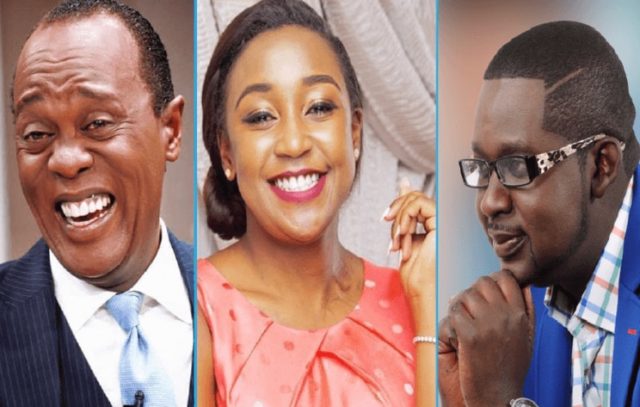 The media industry in Kenya is always on a constant revolve. Most media personalities who have had a grasp of it are now familiar with the fact that they need to position themselves as a brand so as to be more marketable, equating more income on their end.

It takes hardworking and a lot of discipline to be able to stand out in the media industry, especially since it is a dynamic one. Below is a list of the richest journalists and media personalities in Kenya 2022;

Jeff Koinange is such a household name, thanks to his show, Jeff Koinange Live (JKL) that currently airs on Citizen TV. The 56-year-old media personality has been able to grow in the industry over time. At one point in his career life, he worked at CNN. Apart from JKL, he also hosts a breakfast show at Hot 96 Radio. Jeff pockets about Kshs. 2.5 Million every month and his net worth is approximately thought to be over Kshs. 500 million.

He is a 62-year-old Kenyan media personality and politician. He was the first African Journalist to win an Emmy’s Award. He is a TV producer and Journalist. However, he was able to branch from it and joined politics. Raphael Tuju’s main investment is in communication and Real estate. His net worth is over Kshs. 100 Million.

Julie Gichuru is a 48-year-old entrepreneur and media personality that has been in the industry for a while. She was on TV hosting and moderating a political talk show and other controversial topics. She currently owns a production company known as Arimis Media.

She is also the Company Director of Acumen Communications as well as the Independent Director of M-Cheza Betting Company. While at TV, her monthly salary was approximately Kshs. 1.1 Million.

Having had worked at the media industry for about 20 years, she is widely referred to as ‘the queen of radio’. She has been very hardworking and her breakthrough came when she got a job at Capital FM in 2000. Caroline Mutoko is currently the Group Managing Manager at Radio Africa. She earns about ksh. 2 Million every month.

He is a 47-year-old Breakfast show host at Classic 105. He hosts the show alongside Churchill and they are commonly referred to as ‘Maina and King’ang’i’. The show is one of the most tuned in breakfast shows in the country. As a matter of fact, he won the SOMA 2017 Awards as the best Talk Show host of the year. Maina Kageni earns about Kshs. 1.8 Million every month.

He is the richest comedian in Kenya, owning the Churchill show. Apart from his comedy show, he also works as a Radio host at Classic 105’s breakfast show alongside Maina Kageni. Capital Group Limited pays him about Kshs. 1.3 Million every month. This is excluding incomes from Churchill Show Comedy and other endorsements.

He is an award-winning journalist. Linus Kaikai is currently the Director of Strategy and Innovation of Citizen TV as well as the Kenya Editors Guild (KEG) Chairman. He earns about Kshs. 1.2 Million every month.

Betty Kyalo won the 2017 SOMA Awards as the Media Personality of the Year. She was a TV anchor at Standard Media during Friday Briefing at KTN before she resigned. She made a comeback and she is now at K24 TV where she hosts ‘The Weekend with Betty’ show.

He is one of the youngest yet successful media personalities in the industry. At 34 years old, Larry has been able to work at a number of TV stations, producing quality work and attracting numbers that equate great income. He was quite famous during his time at The Trend on NTV before he resigned in 2018. He currently works as BBC Africa Business Editor.