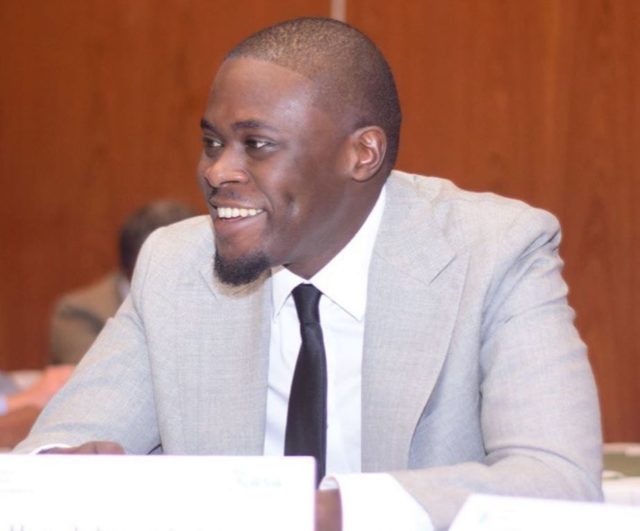 Arthur Johnson Koskei Sakaja is the current Governor of Nairobi county after serving for the last five years as the county’s senator. He is also a philanthropist and businessman who is the CEO of Arthur Johnson Consultancy.

Johnson Sakaja is 37 years old as of the year 2022. He was born on 2nd February, 1985 in Nairobi, Kenya in the then government quarters in Parklands, Nairobi, Kenya. Sakaja hails from the Sabaot sub-tribe of the Kalenjin community of Kenya. He gets to celebrate his birthday on the 2nd of February, every year.

Sakaja is the lastborn in a family of three siblings. His mother died when he was just 9 years old.

Sakaja attended Aga Khan Nursery and Primary School up to 1998. In the year 1999, he joined Lenana School for his secondary education. It was during this time that his leadership qualities were discernible. He even became the prefects’ coordinator as well as the law society vice chairman.

He then went to University of Nairobi (UoN) after failing to raise enough school fees to join Harvard. He graduated from the University of Nairobi with a degree in Actuarial Science. It was during his fourth year of university that he set up a financial consultancy firm known as Arthur Johnson Consultants that still runs up to date.

After graduating from university, Sakaja landed his first job at Price Waterhouse Coopers (PWC) at the age of 19. However, one year later, he lost his job. This obligated him to look for menial jobs such as working at his aunt’s cyber café. He even tried to be a musician at this time but he failed terribly.

In 2005, he used his platform as a SONU leader to rally the youth at the Referendum. This paved his way to national politics since he joined the Kibaki team for 2007 elections as the driver. He later became the director of the Vijana na Kibaki lobby group. He took the lead role in the vote tallying support for the presidential secretariat.

He addressed President Mwai Kibaki’s Cabinet during the 2008’s post-election crisis when he was just 22 years old. He did this so as to find a solution to what the pain that the election caused. It was during this time that he first met the current President Uhuru Kenyatta.

At this time, president Uhuru Kenyatta was the Minister for local government. Sakaja then moved to help with the making of the 2010 constitution where he was in charge of the definition of constituency boundaries.

At the age of 26, he helped form The National Alliance (TNA), a party that saw president Uhuru Kenyatta ride to victory during the 2012- 2013 presidential elections. Sakaja became the chairman of TNA at the age of 27, being the youngest chairman of a ruling party in the world.

Sakaja served as the Chairman of TNA till 9th September, 2016 when the party merged with 12 others to form the Jubilee Party.

He was then nominated to Parliament by TNA party, which is now part of the ruling jubilee coalition (now Jubilee party). He became the nominated Member of Parliament. During the 8th of August, 2017 General elections in Kenya, he was elected as the senator of Nairobi county.

In 2017, the then COTU Secretary General Francis Atwoli was on the front-line, pleading Kenyans and more specifically Nairobians to vote for his ‘son’ Johnson Sakaja who was eyeing the Nairobi’s Senatorial seat. Atwoli said these during the Labour Day celebrations where he urged Nairobians to exercise democracy in a peaceful manner while voting.

Sakaja ended up as the winner of the Nairobi’s senatorial seat, garnering 163,448 votes, beating his rival Mutinda Kavemba who only garnered 33, 109 votes.

Sakaja became the senator of Nairobi county after he was elected during the 8th August 2017 General elections, a position he has been holding for the last five years. He is the current governor-elect of Nairobi, awaiting to start his gubernatorial job soon after official release of the 2022 election results.

Johnson Sakaja is a member of Jubilee party. He previously saw The National Alliance (TNA) Party being formed. TNA was the party that gave President Uhuru Kenyatta the ticket to presidency during the 2012- 2013 General elections. Sakaja also became the chairman of TNA party. Soon after, TNA party together with 12 other parties came together to form the ruling Jubilee Coalition, now Jubilee party.

A few days ago, Kenyans could not hide their joy after some media houses misquoted Sakaja’s statement and thought that Kenyans were going to live rent- free amid the ongoing Covid- 19 pandemic. However, in an interview conducted by Citizen TV, Sakaja specified that the Pandemic Response and Management Bill will try to cushion tenants during pandemics. That did not mean that the tenants were exempted from paying rent.

He indicated that he is looking at a scenario where the tenant and the landlord can sign an agreement where rent can be settled at the end of the pandemic so as to give both parties a win- win situation.

Sakaja is blessed with a beautiful wife by the name June Ndegwa and they have two sons and a daughter. He got to first publicly show his wife and sons when the family attended a prayer day at Moi Girls High School and Lenana School in late 2017, ahead of KCSE exams. He has also set the internet on fire after showing his family on his swearing in ceremony as the new governor of Nairobi county. 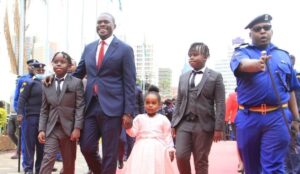 Sakaja is a loving, prayerful husband and father who loves spending quality time with his family. 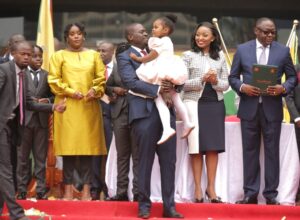 Johnson Sakaja’s current net worth is about $2.1 million. Apart from earning a coveted amount of income by being the Senator of Nairobi, he is also a businessman who invests a good amount of money in his projects and companies. He owns and runs a consultancy firm known as Arthur Johnson Consultants.