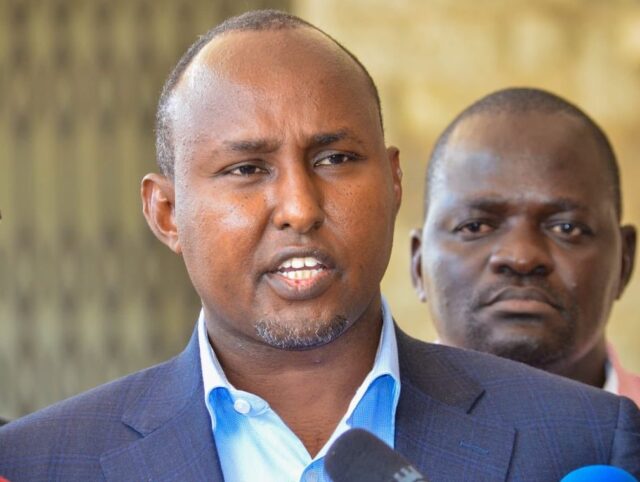 Junet Mohamed is a Kenyan politician strongly allied to the 2022 presidential aspirant and former prime minister Hon. Raila Odinga. His political career has seen him explore unchartered grounds for a Kenyan Somali in the Nyanza region. This article looks into his biography highlighting his career journey, personal life, and future aspirations in the political scene.

He was born on 25th October 1977 to Sheikh Nuh Mohammed, an entrepreneur from Mandera County. When he was young, his family moved to Migori County in Shiekh Nuh’s business ventures.

He attended Migori Primary School after their relocation where he began making friends in the Nyanza region. Afterward, he enrolled at Lenana School to pursue an undergraduate degree in Business Administration. He graduated and then went back home in Migori to pursue a political career.

His earliest political ventures can be traced back to 2003 when he was elected Migori town mayor. His tenure involved him attending to the needs of the people of Migori as a voice of representation. Ten years later, he joined national politics on an Orange Democratic Movement party ticket.

This was the beginning of a strong friendship with Raila Odinga, the ODM party leader. In a past interview, Junet Mohamed said that being close allies with the former prime minister has kept him secure from political strife.

With the ties and relations he had forged during his term as mayor and growing up, he was able to become the first Kenyan Somali to clinch a seat as Suna East Member of Parliament. In the 2017 general elections, he secured re-election serving the people of Suna East for another five-year term. In the upcoming 2022 general elections, Junet Mohamed is yet to reveal his future political plans. It is unclear whether he is going to pursue the Migori gubernatorial seat or leave the political arena.

In the National Assembly, Mohamed is the elected minority leader representing the needs of minority groups in parliament. Throughout his career, he continues to maintain a tight relationship with Hon. Raila Odinga is evidenced in his active roles in Baba’s projects. One is that he co-chairs the Building Bridges Initiative Secretariat with Waweru Dennis. He spearheaded signature collection where he was able to bag millions of signatures in support of the BBI.

Moreover, at the ODM Party, Mohammed is the director of elections. At the recently held Azimio la Umoja Convention, Junet Mohamed was the event’s Master of Ceremonies steering the highly anticipated and attended event where Raila Odinga officially announced his 2022 presidential bid.

He is of the Muslim faith and the second-born child in his family. Junet married Deka Jamaa with whom he had five children.

Junet Mohamed Net Worth and Property

He is estimated to be worth $50,000 credited to his political and leadership roles.