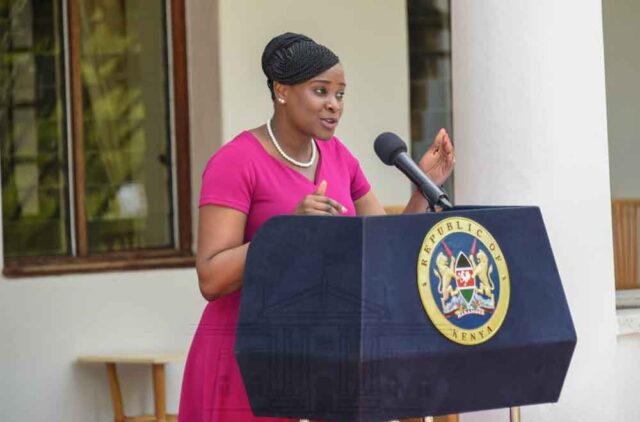 Kanze Dena is a Swahili anchor, producer, and director at Citizen TV and the current Spokesperson, Executive Office of the President, and Head of President’s Strategic Communication Unit (PSCU). This article looks into her biography highlighting her background, educational background, career journey, and personal life.

Hailing from Kwale County, Kanze Dena was born in 1980. Here, she spent her formative years and began her educational journey. She is the fourth born in a family of six. Her parents are from the Duruma subtribe and when she was four, her parents separated thus she grew up under the care of her late single mother.

She began school at Kianjokoma Primary before she proceeded to Kieni Girls in Embu County for her high school education. Initially, Dena was drawn towards the medical field and had tried making applications to the Kenya Medical Training College with no success. She instead enrolled at the Foundation College of Professional Studies to study Journalism and Mass Communication.

Her career kicked off at a restaurant where she served as a waitress. This was a job she held before she enrolled in college. Afterward, she got a secretarial job and later on got an internship with Kenya Broadcasting Cooperation (KBC). This was her entry point into the media world. During her time her manager noticed her voice and suggested trying out readership on the radio. She succeeded and began reading 4 pm news at the radio station.

Before her appointment in the Deputy Statehouse Spokesperson post, she had worked at Citizen TV as a news reporter and news director at RMS. Dena then replaced Esipisu Manoah who was made Kenya’s Ambassador to the UK.

Kanze’s mother passed away due to colon cancer. This was a year after she was delivering her child. She is married to Nuvision Media CEO Marrero Nick in 2019. The couple held a highly privatized wedding at the Ol Pejeta Conservancy. They would later be blessed with a son named Amani.