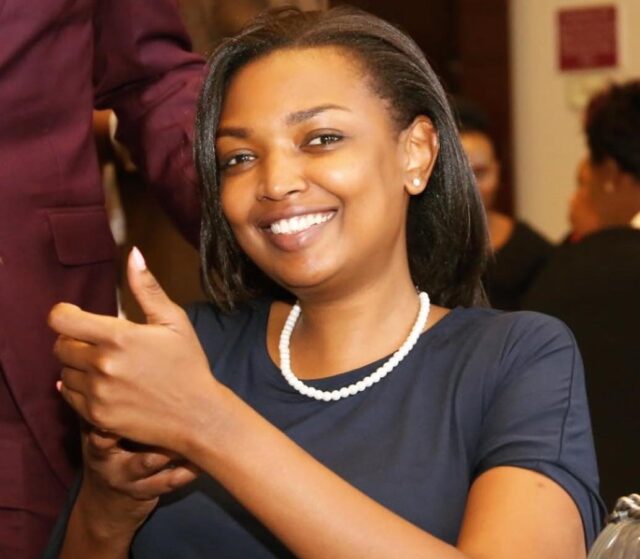 Karen Njeri Nyamu is a Kenyan practicing advocate and a politician who doubles as the Director at Nairobi Water and Sewerage Company. She owns her private law firm known as Njeri Nyamu & Co Advocates located at ICEA building, 17th, Kenyatta Avenue in the Nairobi’s CBD. This article looks in to her biography, personal life, net worth and other relevant facts that you may need to know about her.

Karen is thought to be in her early 30’s by age. She was born and raised in Eastlands Nairobi, Dem Wa Mtaa to be precise.

She is an alumnus of University of Nairobi where she pursued a course in Bachelor of Laws (LLB) and a practicing advocate. She is currently an advocate of the High court and a politician too. In the year 2017, she vied for the Nairobi’s women representative post,of which she did not win. On Jalang’o Online TV interview, Karen stated that if the BBI favors her, she will still be part of the 2022 elections candidate to vie for the post that she had vied for before.

Karen rubbished the claims that she had political godfathers said that her savings and clients helped her finance the 2017 elections campaigns.

“I got a lot of support from clients because I was still running a law firm; so my clients and friends supported me fully” said Karen.

Karen is a mother of two; a daughter (4-year-old) whom she had with her Ex and a son whom she had with Samidoh. Karen Nyamu keeps on posting her first baby daddy on social media. Her baby daddy’s name is Kelvin and he is a DJ by profession though information about him is scanty. A post that raised eyebrows was the most recent photo that she posted on her Instagram account wishing the daddy of her daughter a happy fathers’ day.

“Happy Father’s day to this papa of my baby. We are so thankful for everything you do. Thank you and God bless!” The post read.

From the photos, you can tell that the couple are still in good terms and are great co-parents to their daughter. Here is the photo of Karen’s Ex and baby daddy: 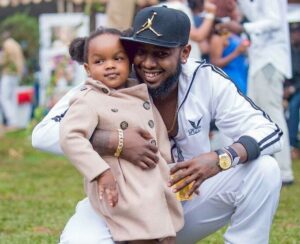 Karen first encountered Samidoh while he was performing in a political meeting in the year 2019. Karen added that she did not know that Samidoh had a wife at first because she did not see a ring on his finger. She first learnt of Samidoh’s wife through a friend who is also a politician.

On the Samidoh’s wife drama, Karen stated that she does not fight Samidoh’s wife, she is so supportive and has even helped her to register a company and she is willing to help her get the tenders. In late February 2021, Karen had a public altercation with Samidoh over him not recognizing her son. She demanded that Samidoh recognizes her son and indeed that came to be.

The two (Samidoh and Karen) subsequently apologized to fans and family for their behaviour after the inevitable fall-out that came. On Jalang’o’s interview, she commended about marriage by saying that she is not willing to get married because of her experiences with married men out there.

Karen has also been alleged of dating rich men, whom she milks dry and dumps them. She is also alleged to have dated powerful men in Kenya including a wealthy city businessman- Jacob Juma, Kenya’s Deputy President William Samoei Ruto, Anthony Kungu- the Chairman of the Betting Control and Licensing Board and a shareholder of Sportpesa and Former Prime Minister Raila Odinga’s late son, Fidel Odinga.

Karen Nyamu Net Worth and Assets

Karen has amassed a good amount of wealth both in business and her career. Her estimated net worth as of the year 2021 is approximately over Kshs. 100 Million.