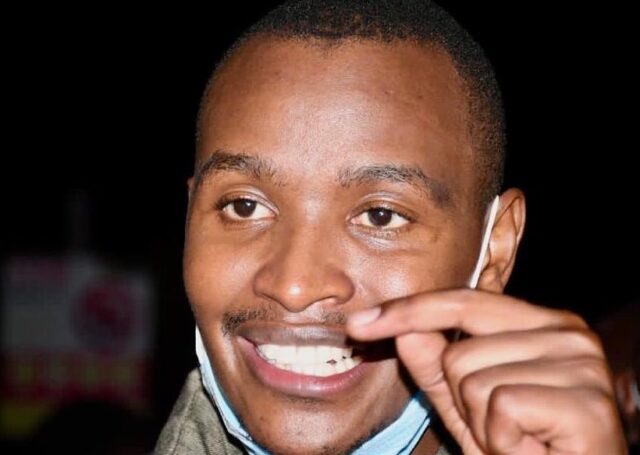 You must have definitely heard the banger song, ‘Ndiri Mutwe Mwega’ be it in functions, events, on transit or in a social gathering. Samuel Muchoki Ndirangu, better known to his extensive fanbase as Samidoh is a famous, popular and high performing Kikuyu musical artist.

He has won over the hearts of many, regardless of their tribe with his songs such as ‘Kairitu Gakwa, ‘Riari Itheru’, and ‘Ihoya Ria Samidoh’. This article brings you his biography, highlighting his journey to his present-day status.

Samidoh Age and Place of Birth

Samuel Muchoki alias Samidoh is 31 years old as of 2021. He was born in the year 1990. Muchoki hails from Nakuru County in a region called Subukia. He was born into a family of humble means and has two elder brothers and three younger brothers. His late father passed away when he was three years old.

Following the sad occurrence his extended family came against his mother and her six sons chasing them out of the place they called home. The family then relocated to Nyandarua, a place called Oljororok. Samidoh was orphaned during his secondary education time when his mother, their sole breadwinner, passed away.

Samidoh attended Oljororok Primary School for his formative education and however dropped out when he had to offer his hands in supporting the family’s basic needs. He completed the level at Kieni Primary School and was enrolled in Kieni Secondary School shortly afterwards. He spent his high school years in Kieni and Oljororok Secondary Schools. He then got into Kenya Polytechnic University to study Business Information Technology.

Samidoh is professionally an Administration Police Officer as many of his fans have come to know following interviews with several media houses. One such interview was ‘Up Close with Betty’ hosted by Betty Kyalo where he let the fans in to his family and his work as an AP cop. He has worked in several stations including Dadaab, Eastleigh, Mpeketoni, and his current placement in Athi River.

Musically, Samidoh has always had an innate musical ability and has sang from a young age. He was an active member of the choir at school and his church. His career began with his brother’s support as a drummer in Kamande wa Kioi band. He started out as a background vocal artist. In 2016, time was ripe to set out his own path releasing ‘Ndiri Mutwi Mwega’, a song that has amassed more than 1.5 million YouTube views.

Samidoh is married to a beautiful and supportive wife called Edith Muchoki Nderitu whom he met back when they were both students at Oljororok Secondary School. The couple is blessed with two kids, Shirleen and Michael. Samidoh further has another son with Karen Nyamu.

The two have recently been in a rough patch after Samidoh confessed to impregnating lawyer and politician Karen Nyamu and unfortunately on the confession day, Edith was involved in a road accident but made it out alive. The proactive people and those who go for what they want will certainly turn out successful as proven by Samidoh.

On his Instagram page, Samidoh recently uploaded his photo alongside his wife accompanied with a very long post. The post saw various reactions from his fans, expressing various feelings. In the post,  he admitted to what he did and asked for forgiveness from his family and fans. Here is the screenshot: 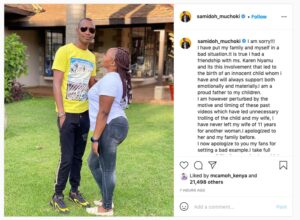 Samidoh Net Worth and Assets

Samidoh makes a decent earning from his musical career that drops hits on a regular and making appearances in events and social places. YouTube earnings from his well performing songs also boost his wallets status coupled with his AP role.