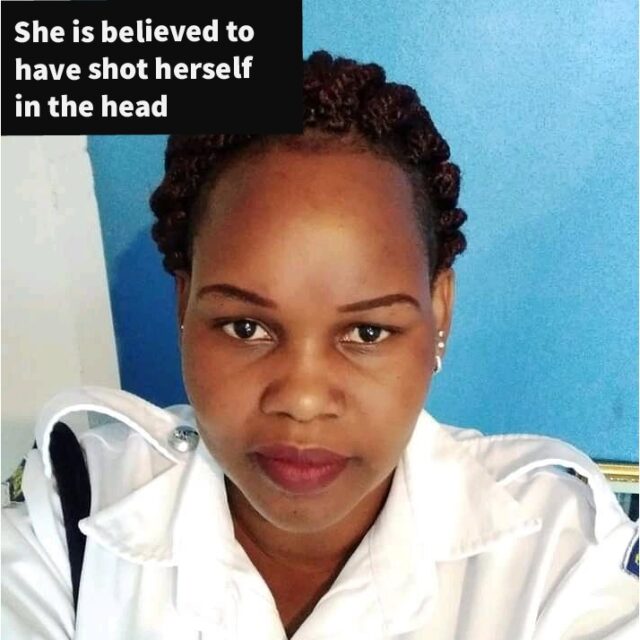 Fugitive cop Caroline Kangogo who has been on the run and evaded the long arm of the Law was found dead on 16th July 2021 in her home in Elgeyo Marakwet. The news was confirmed by George Natembeya, Regional Commissioner in charge of the Rift Valley region. The cop who had been a highly trained shooter and corporal is believed to have died by shooting herself in the head.

She left behind a text message to her parents and brother detailing her reasons for her past actions. Kangogo said that she had no regrets for killing Ndegwa who owed her more than Ksh 1.5 million and had refused to pay her back. She also said that Ogweno was the love of her life and had since Monday when she took his life had been telling her it is well. In her text message, Kangogo asked to be buried in her father’s home and not her former husband’s. She revealed that she spared his life for the sake of their two children. Kangogo said she wanted to be dressed in a white gown when she was buried saying it was her wedding day.

She succumbed to the bullet wounds in Anin, Nyawa (Elgeyo Marakwet) in a bathroom in her parents’ homestead. Her body was found and close to it was a Cesca pistol and a spent cartridge. Investigators are yet to ascertain that it was indeed a suicidal act and not a murder. This is because the crime scene and her body placement did not match one of a suicidal act. She is believed to have made her way to Nyawa on the evening of 15th July although the details of what happened thereafter still remain unknown.

The cop who had been stationed in Nakuru for the past six years had managed to remain in her hideout for a record eleven days. This is reported to have been because she operated in a cartel of rogue offices that gave her the ultimate protection.

Caroline Kangogo was alleged to have been involved in the protection of rogue officers, politicians, cartel lords, and other individuals of high societal standing. She was the prime suspect for two murders in Thika and Nakuru taking the lives of Ndwiga Peter and Corporal Ogweno John.

Before her suicide act, Caroline had made communication saying she did not want to be held in a police cell upon her surrender. She based this on the infamous extrajudicial killings that would often follow suspects in police custody.

To this effect, Khaminiwa and Khaminiwa associates were already on her case and had a filed a petition for Kangogo to remain free as long as she surrenders. Veteran lawyer John Khaminiwa mentioned that he was ready to represent her given that she cooperated with the authorities. This was however not to be as her life came to a tragic end leaving villagers and her parents grief-stricken.