Larry Madowo is an unmatched Kenyan broadcast journalist, technology editor, blogger, Business Editor and news anchor. He works at BBC as the Business Editor for Africa. Before leaving for BBC, he hosted talk show on NTV known as ‘The Trend’, where he garnered incomparable viewership and fandom.

Larry Madowo was born on 14th July, 1987 in Barding village, Siaya county, Kenya. He is 33 years old as of the year 2020. He hails from the Luo community of Kenya. Larry Madowo gets to celebrate his birthday on 14th July of every year.

He was born to Mr. Madowo and Treazer Anyango Madowo, who was a primary schoolteacher. He lost both his parents by the age of 14 and had to struggle from a very young age. Larry has a baby sister known as Liz Madowo who graduated from Moi University. Liz is a fashion blogger as well as a stylist.

In 2006, he enrolled for a Communications degree at Nairobi’s Daystar University. He dropped out of college in 2008. He later came back to the same institution to further his studies where in June 2014, he graduated with a degree in Bachelor of Arts- Communication.

Larry Madowo’s first leg into the media industry was in 2007 when he did an internship for Bahasha Fm, which was a vernacular radio station. His role was to read news in English. 1.5 years later, Larry dropped out of college to work at Kenya Television Network (KTN). 3 years later, he left KTN to go work at NTV as a Business anchor and reporter.

In May 2012, Larry joined CNBC Africa, which is a South- African based station. He joined the station as one of the main anchors where he pioneered a show known as ‘Eye of Kenya’ which aired on prime time. 6 months later, that is in December 2012, he returned to NTV as the news anchor and technology editor.

That is when he made the decision to go back to college. He went to Daystar University where in June 2014, he graduated with a degree in Bachelor of Arts- Communication.

It was during his 2nd time at NTV that he was able to work on a freelance basis to several global news outlets such as BBC, the Public Radio International, France 24 English and CNN International. This gave him so much knowledge, skill and exposure.

The Daily Nation at one time declined to publish his column of the Kenyan Government Shutdown of four major private TV stations. However, the same piece was published on the CNN website in early 2018. Larry decided to do away with his column and became a Contributing Columnist for the Washington Post’s Global Opinion’s page.

On 11th April, 2018, Larry was announced to be joining BBC News Africa as the Business Editor where he was to lead a team of business journalists from Johannesburg, Nairobi, Lagos, Dakar and London.

2019- The Daily Journalism (Single Report) category at the 2019 Association of International Broadcasting Awards on 6th November, 2019 that took place in London, UK. This happened after he presented a radio documentary on the Chinese- built railway in Kenya.

Larry joined the desired station BBC in April 218 after leaving NTV where he had been working as a talkshow host as well as a prime-time news anchor. He currently works at BBC as the Business Editor for Africa.

In July 2019, Larry relocated to the United States pitching camp at the Columbia University in New York as a full-time student. Before leaving, his colleagues at the BBC held a party at Ngong forest Sanctuary in Nairobi as a see- off. This came in after he became one of the beneficiaries of the 44th Knight-Bagehot Fellowship in Business and Economics at the Columbia Journalism School, where the fellowship provides full tuition and a living allowance of Kshs.6 million. This amount was being paid to experienced journalists to take graduate courses at the university.

The award-winning news anchor worked at a talk show on NTV known as ‘The Trend’ before moving to work at BBC.

A lie goes around the world twice before the truth gets half the chance. This seems to be the matter after rumours of Larry Madowo and Victoria Rubadiri tying the knot took the internet by storm in March, 2019. It even states that the two lovebirds had been dating for 3 years before tying the known at Marula Manor in Karen, Nairobi.

All these turned out to be false after they both denied the claims. The duo worked at NTV as prime-time news anchors and had amazing chemistry while on set. The two were then separated after media reshuffle before they separate ways in their career paths.

On Thursday, 6th of January, 2020, Larry Madowo was rushed to hospital on what was termed as an emergency by BBC. He took to his twitter account and posted, ‘it is all fun and games until you end up in the emergency room considering your own mortality. No, it wasn’t for coronavirus. And yes, I’ll live.’

However, this post was not welcomed by a good number of netizens, with most wondering how he got to pause for a photo when it was considered an ‘emergency’.

As per the information we have gathered from various sources, Lary Madowo is single or rather details about the lucky lady are not currently in the public domain.

Larry Madowo’s current net worth as of the year 2020 is about $18 million. 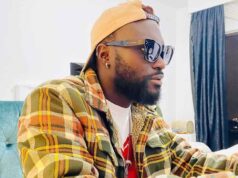 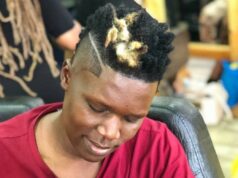