Kenyans online tore singer Bahati apart, mocking him for the number of men his wife, Diana Marua dated before the two settled together. After a series of accusations and rumors that Diana was married before meeting Bahati, she opened up during a ‘Q and A session’ on YouTube, claiming that the accusations were not true. According to Bahati, Marua has formed a habit of leaving him citing one instance when she left him with their five-month-old baby, Heaven Bahati, to go live with one of her many ex-boyfriends.

Below, we look at some of the guys that Diana got on with in her past.

Photos of the Kenyan footballer and Diana have surfaced online. The singer Bahati has since taken to social media to re-affirm these claims in a Vlog where he revealed that one of Diana’s exes was an instrumental player at AFCON who had scored 3 goals. This attracted theories with many Kenyans joining the dots that the mysterious ex Diana Marua dated was Wanyama.

In a viral video, Diana Marua disclosed the possibility of having dated the controversial gospel artist Willy Paul a.k.a ‘Bwana Mkunaji’ a.k.a Pozze flouting accusations that the singer attempted to rape her three years ago. Willy Paul has since refuted the rape accusations.

However, details of the two having dated were confirmed by Weezdom who said in an interview with Radio Maisha’s Mwende Macharia that Diana and Willy Paul went on several dates alleging that the duo seemed to get along well on the dates.

Speculations by Kenyans online have it that Diana must have had a thing with media personality Jalango a.k.a “Mzee Jalas”. Diana sparked theories about this after confessing in a vlog that shared by her and Bahati of an incident where she caught her ex cheating on her, pants down, in a car. She went ahead to give a clue of the mysterious ex’s name stating that his name starts with J. Who is this J…???

Nothing much is known about Kiptoo Kirwa but a photo that went viral on social media shows him and Diana posing in a cozy manner. This too led Kenyans online to speculate and add to the growing list of men who had a thing with Diana Marua.

Confirming rumors of having dated Diana, Imbaga said “Indeed Diana is my ex…”. Imbaga who is the owner of Pitstop Bar and Restaurant in Langata was caught in a controversy of having sired a kid with Diana, allegations he dismissed in the same statement.

It is believed that Diana’s relationship with the former KTN sports anchor is the longest she ever sustained before jumping ships to be with Bahati. The relationship lasted for three years between 2012-2015. 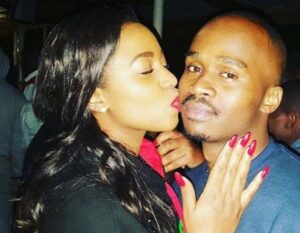 Diana disclosed details of her getting on with a married car hire services operator with whom they had set to conceive a kid saying, “I had a boyfriend who owned a car hire so he could let me take whatever car I wanted. I lied to Baha and told him I had a fleet of cars and I’m in a car hire business.”

She further confessed that she went out with married men for money. “At some point, I was even a side-chick to a married guy….” adding,  “All I wanted was to live well; I dated people for money. Someone used to pay my rent; I had someone who would shop for my house and one who would buy me clothes and another one who would take me out.”