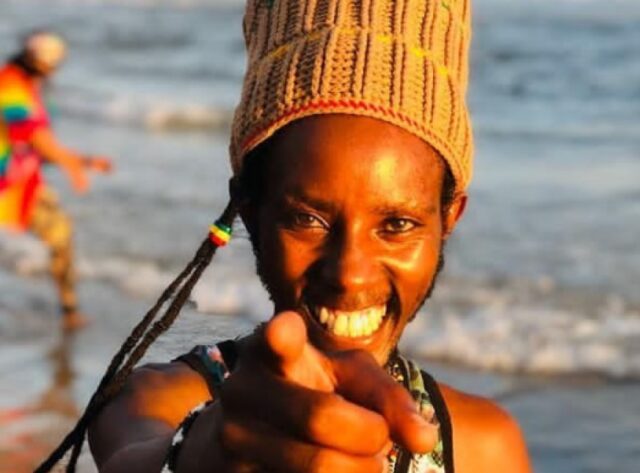 An obvious Rastafari or Rastafari enthusiast in the radio waves sharing good vibes and similar discussions is the subject of this article. A favorite radio presenter for most Kenyan radio listeners is one Mbusii better reffered to as Mbusii na Lion Teke Teke / Mbusii na Lion Moha. In this article, we look at the biography of Mbusii who is a radio presenter and is one of those few Kenyans who have been privileged to interview the country’s president in his State House residence.

Daniel Githinji was born in Nairobi, Kenya and grew up in quite tough situations. A lot of information on his family such as details on parents and siblings remains unknown as at the time of this article’s publication.

Information on the schools he attended for primary, secondary nor higher education learning have been made available to the public.

Mbusii’s career journey has been one tough one, going through several ups and downs on the road to success. He has told stories of how he used to peddle drugs just to make ends meet and provide for his family.

He began doing drug peddling to provide money to feed his family as a sole bread winner. He said he used to do bhang sells around Nairobi’s Kenya National Theater where his customers would go to find him and purchase some of the drug and became regular customers.

In one such occasion while he was awaiting a customer, a presenter from the Ghetto Radio station was on duty in search of a comedian for their shows which were gaining popularity among several Kenyans. He was a referral and the first interview was the first step in his professional career.

At Ghetto Radio, Mbusii worked as an office messenger and did a few travel updates for some time before he was promoted to host an entire show which he did and named Goteana. Goteana was a Reggae music show whereby listeners would call in to the studio and make their requests on the songs they wanted played and the hosts would do so while keeping all conversations lively, interactive and very interesting to retain attention for more time.

After a while, Mbusii switched to Radio Jambo station where he says his salary grew allowing him to completely relish his drug peddling endeavors and focus on his career. This was also due to the fact that both he and his wife had found themselves on a few occasions on the wrong side of the law leading to spending some days behind bars. It was from this job that they were able to move out of the Korogocgo slums where they lived to better lands.

In his work on radio, Mbusii is an active youth ambassador, always addressing matters that affect the youth and voicing the concerns of those who may not have the platform to do so. This particularly led to him being 1 out of 59 individuals selected as Head of State Commendation Awardees in the Mashujaa Day celebrations in 2017. He got this privilege given the intense works he carries out in promoting youth needs among the Kenyans. He got to interview the president and have a chat about his personal life.

Mbusii is married and blessed with three children, one daughter named Stacy.

Mbussii Net worth, salary and Assets

Mbusii’s net worth has not been made available to the public yet nor the information on the assets under his name revealed.