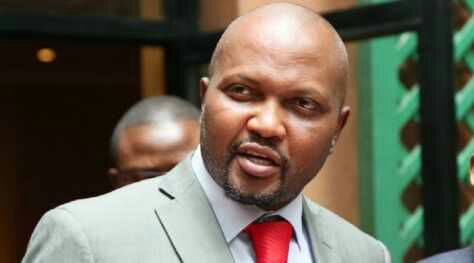 Moses Kuria is a known Kenyan politician who has been in the limelight after he suffered third-degree injuries on his feet after an accident. He is a famous politician known for his sharp comments against some political rivalries such as Raila Odinga and the Orange Democratic Movement. This article looks into his biography highlighting his personal life, career journey, and more details on his life.

The politician was born in 1971 in Kiambu County. He grew up in a humble home and more details o his family are yet to be made public.

He attended Githuya primary school after which he moved to Ituru Secondary School. He studied there for a while before he got expelled. After that, he joined the University of Nairobi where he pursued a Bachelor of Commerce.

The politician began his career at Nyagari and Associates firm working in Audit. He has also worked as an accountant at Oloolaiser Dairy Society Limited. His financial career has also seen him work at Standard Chartered bank.

Moses Kuria enjoyed a rewarding experience in Finance as he has also been able to work as a bank manager at Al Rajhi Bank located in Saudi Arabia. Additionally, he worked in Dubai at Wamad Information Services serving as Chief operating officer.

His political career took off in 2007 when he joined the Party of National Unity in the capacity of Director of Programs and Spokesperson. In 2013, he vied and was elected into the Member of Parliament office of Gatundu South, the office he retained in the 2017 general elections.

The politician is married to Joyce Njambi with whom he has two children.