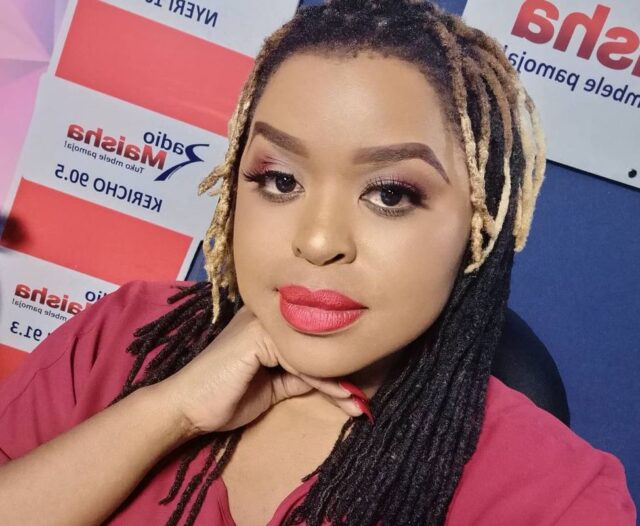 Radio presenter, youth mentor and emcee Mwende Macharia is the topic of this article following her growing fan base and in line with that several questions about her life and career. With a vibrant social media presence and a passion for the youth, Mwende Macharia is a bubbly and enthusiastic character who harnesses her resources to make a difference in the world for herself and for other people as well.

Mwende was born in Diani where she spends a lot of her time to date. Apart from being raised in Diani in Kenya’s coastal region, Mwende Macharia went to school in Diani and only moved to Nairobi when work came calling. Mwende is in her early 30s as at the year 2020.

Mwende attended primary, secondary school and college in Diani where she began exploring her talent and skill in doing emceeing in several gigs earning her a means of earning.

One of these events was a volunteer experience at a rehabilitation center called Teens Watch in Diani where she learned that she was passionate about affairs of the youth and that she had the skill to make some contributions to supporting their cause.

After completing her studies she began job hunting and in 2009 in the month of May, she landed her first job at Sheki FM. Here she did a few shows and advertisements for various brands doing voice overs for their products. She currently works in one of Kenya’s most popular radio stations – Radio Maisha.

She continued working hard and in 2015 developed her own foundation named Champs Foundation which was dedicated to empowering the youth, addressing their needs and providing mentorship to guide them in the careers and developing their talents. This was a passion of hers since way back and the foundation offered her a bigger opportunity to make changes in the lives of other youth.

The media personality is a mother, having one son. Not much is known about her son’s father and she has managed to keep this part of her life very private and away from the public.
She has in the past faced criticism concerning her dress patterns with claims that she was the worst dressed media personality. This has however changed in the past where she made a change and embraced a new style better fit for her.

Mwende Macharia makes a decent earning from her work on radio and once in a while flaunts her expensive clothing, lavish home and cars on her social media platforms. Her exact networth is yet to be established as it remains unavailable as at the time of this article’s publication.