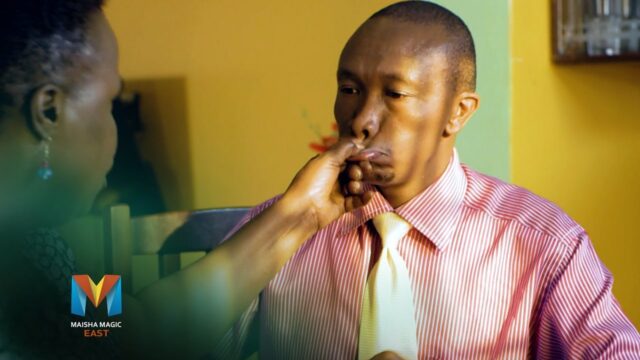 Nyabuto from Hullabaloo Estate, a Kenyan comedy series that has gained a lot of public attention from its depiction of events and occurrences that do happen in numerous Kenyan neighborhoods. The show is aired from Monday to Wednesday at 9:30 pm and at 8 pm on Fridays. Maisha Magic is the platform that brings this show to its fans who can also catch it back-to-back on Showmax. This article takes a closer look at Nyabuto’s story, one of the key actors who entertain viewers on the show.

Nyabuto was born David Konana in Narok County and is actually not a Kisii as he portrays on the show. He is one of Kenya’s actors who act as members of a certain tribe when they actually belong to a different one like Inspekta Mwala. He grew up in Narok County and would move to Nairobi in search of a better life and more opportunities.

Details on his academic background are unavailable to the public.

He began acting in Vioja Mahakamani, one of the oldest shows on Kenyan television where he would meet and work with other veteran thespians such as Ondiek Nyuka Kwota, Alexander, and Alphonse Makoha. After the show came to an end when the actors and actresses walked out the door following a proposed change in the original show, they moved to new grounds. Vioja Mahakamani creators thought they would bring in more youth into the show in order to appeal to more of the younger Kenyan population and thus be competitive among the new and rising shows. This would however not augur well with the cast who packed their bags and left.

The group moved to KTN Home for a drama series called Daktari where Nyabuto played the role of a cleaner. They would then transition to Maisha Magic East’s Hullabaloo Estate in 2017. He plays Nyabuto, a heavily accented Kissi man who is a water supplier in the estate.

Beyond acting, he is a Christian that belongs to the PCEA Church in Narok and sings in the town choir as a soloist. He has a YouTube channel where he shares several songs and has built a community there. Additionally, he is an MC that does his work in weddings and parties.

Details on his personal life are however unavailable to the public.