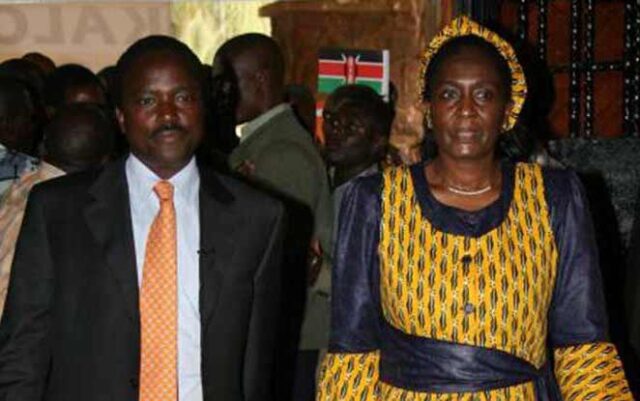 Pauline Kalonzo is Wiper leader Kalonzo Musyoka’s wife who has a knack for keeping away from the public eye despite her husband’s high-riding political profile. She is the subject of this article as we explore her biography highlighting her background, education, career, and personal life details.

She attended Mlango Girls for her secondary school education where she would at an early age meet her future husband. As a staunch Christian and believer, Pauline was a member of the Christian Union where she also served in leadership in the position of Secretary. She would later join the university where she pursued Finance preparing her for her future career in the banking sector.

She has been a professional at the Central Bank of Kenya for several years rising up the ranks albeit quietly. Pauline Kalonzo is also known for her Toyota Corolla that she drives herself to work in. This might be shocking to many who would expect a NASA leader’s wife to be chauffeured in an expensive, and possibly guarded vehicle. Her career had been kept away from the public light until when she began getting sick and her absence at work would be noticed. A statement in this said, “Lately, she has not been quite consistent….“She comes to work occasionally, though she never sticks around for long.”

Pauline also sits on the board of directors at the Kalonzo Musyoka Foundation that carries out charity activities.

Pauline met Kalonzo Musyoka when they were both in high school and according to the Wiper leader, he knew that he had found his wife. “Huyu mke wangu Pauline tulijuana na yeye akiwa form 2 na mimi nikiwa Form 5. This was about 1972, Yeye alikuwa Mlango Girls. Alikuwa Secretary ya Kamati ya Wakristo. Na mimi nilipokuwa Meru school tukakutana katika Christians Conference, Mama Maridadi, beautiful, tall and smart. Then after that nikaona a beautiful wife is a gift from God.”

The two would then get married thirteen years later in 1985. Their marriage has been blessed with four children. These include their son, Klein Kalonzo who is an alumnus of the University of Nairobi where he pursued a Journalism and Media degree. His father attended the graduation ceremony but his mother did not as she is known for keeping herself out of the limelight. They also have another son named Kennedy Musyoka who in 2017 was nominated to the East African Legislative Assembly. Their daughter Damaris Musenya is indeed her mother’s daughter and keeps away from the public.

Pauline Kalonzo has been ill for a while and has been in and out of hospitals for about three years. Some of the hospital visits made outside the country saw the Wiper leader miss some NASA meetings as he accompanied his wife for treatment.

Details on her actual net worth are as well kept away from the public light although her husband is a millionaire.