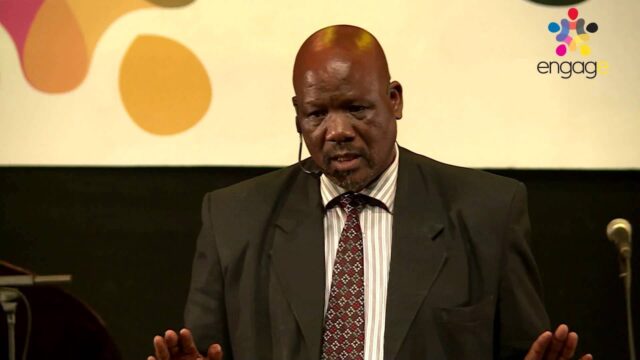 The late Professor Okoth Okombo was a linguistic master and a proud African who committed his life and professional career to promote and preserve traditional African culture. He led a full life until his demise and is celebrated to date for his contributions to language and culture.

He was born on 8th November 1950 in Rusinga Island in a village called Kaswanga. He was an only child who grew up under the care of his foster mother and aunt. As a boy, he spent a lot of time with his grandfather who would take care of cattle with him in the vast fields talking to him about their Luo heritage which instilled in Okombo the need to preserve the heritage as an adult. Growing up, in the same region Tom Mboya was born, he saw the British come in and intentionally seek to drive out the Luo and Suba cultures.

He attended Kaswanga SDA primary school and afterward joined Mbita high school in Homa Bay. He always wanted to be a teacher growing up and would thus work towards this. Okombo later joined Kenyatta college in 1971 where he was not only a stellar student but also an avid volleyball player. He graduated in 1974 with a secondary school teaching certificate. In 1977, he was awarded a scholarship to pursue a BA at the University of Nairobi and in 1979 enrolled for a Linguistics Ph.D.

Between 1987 and 2017 when he passed away, Professor Okoth Okombo worked at the University of Nairobi and was the institution’s youngest professor to present its inaugural lecture.

Professor Okoth Okombo was a published author who penned ‘Masira ki Ndaki’ a Luo-published novel translated to mean Misfortune is Inevitable. This book was one of the first novels to be published in a local language opening the door to many more from other writers such as Ngugi wa Thiong’o.

At the University of Nairobi, he was the chair of the Department of Linguistics and Literature and later on became the Dean of the Faculty of Social Sciences. His time at the university was critical for the Kenyan people as he pioneered the Nilotic language field. He also promoted further research into indigenous African languages.

On a national and international level, Professor Okoth was a critical part of the people of the world with UNESCO and the government to set up language policy in Africa and particularly one for Malawi.

He also founded the Kenyan Sign Language Research Project that produced more than thirty scientific publications on the vocabulary, sociological properties, and structure of the language of deaf Kenyans. Kenyan Sign Language would later be implemented in the media, hospitals, schools, churches, and in courtrooms promoting inclusion. This was a project Professor Okoth implemented in other nations including South Africa, Tanzania, Swaziland, and Uganda. He will always be remembered as a key figure in making sign language fully recognized in the 2010 Kenyan constitution.

P.L.O Lumumba said of the Professor’s contributions; “Nobody can deny that during his life, particularly in the academic arena, Prof. Okombo will be remembered for his love of languages and his love of culture. I remember an occasion when I had a conversation with Prof. Okombo on languages. He was the very first person to educate me as I believe he did with others on the metamorphosis of languages from slang to creole to a stable language.”

The distinguished linguist was a great dancer who loved rhumba music. He would regularly dance to uplift his spirits. He also loved classic European cars and owned a white 1973 Peugeot 504 saloon car (KLB 868). The professor was a father of three children named Brian, Farica, and Gillian. As a great linguist and a great speaker, he was a Kwanza Toastmasters where he was recognized on several occasions for his witty humor. He died in November 2017 while undergoing treatment at the Aga Khan Hospital.