Rachael Ruto is a teacher, currently serving as the first lady of the Republic of Kenya. She is the wife of the recently sworn-in president of Kenya and the former deputy president William Ruto. She was supportive during her husband’s campaign journey, accompanying him on various occasions.

Rachael was born on November 20th 1968 in Kakamega county in the Western region of Kenya. While there isn’t much known about her family, her brother is Samuel Cyrus Shikuku (Sammy Triples).

While Rachel studied education, she failed to get a chance to work as a teacher for a long time as she decided to quit and ventured into the tour business. She took people to places all over the country.

As the second lady of the Republic of Kenya, Rachel became an advocate for women’s rights and empowerment. She was awarded the International Honorary Fellowship Award on Women Empowerment at the Binary University in Malaysia on January 14th, 2017.

Ruto and Rachel tied the knot in 1991. They first lived together in Dagoretti where they got their first child. The couple now has six children. In 2017, Ruto acknowledged a daughter whom he had with a former lover called Pisca Bett. 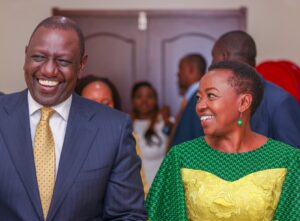 Rachel Ruto’s net worth is not yet known. She earns most of her wealth through her status in the country, as well as the many family businesses in the country.