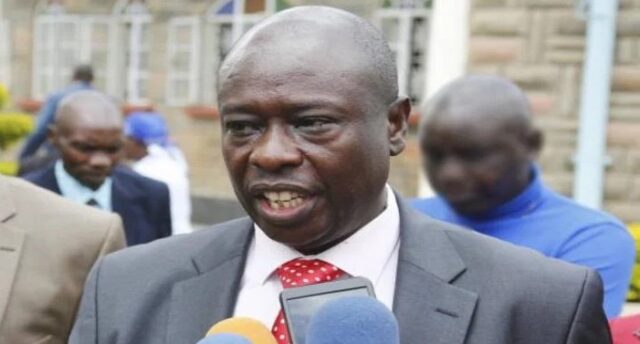 Rigathi Gachagua is a Kenyan politician who is the member of parliament representing the people of Mathira. His family is notably of political leaders as he followed the footsteps of his late brother Nderitu Gachagua who had held Nyeri’s gubernatorial seat. He has been appointed as Deputy President William Samoei Ruto’s running mate under UDA party’s ticket.

Rigathi Gachagua is turning 57 years old in a few months time as of the year 2022. He was born in Ruguru village in the year 1965. More details about his family background are yet to be established.

Rigathi attended Jomo Kenyatta University of Agriculture and Technology where he pursued a course in Information Technology. He talks of an interesting time on campus where he was involved in extracurricular activities and university leadership. He did not end up practicing his profession and took up politics instead.

Rigathi Gichagua was a keen helper of his brother Nderitu Gichagua, former governor Nyeri County and was sometimes considered to be too involved and meddling in the county’s affairs. He later sought to run for the governor’s seat which he unfortunately lost and went into the parliamentary seat race. He has also held the role of District Officer in the past.

He has so far been of great help to the people of Mathira Constituency solving some of the great problems in the area and bringing up development projects covering water, infrastructure and education. His representation in parliament has also been remarkable as he seeks to make the cries of the people heard.

Rigathi is married to Dorcas Rigathi whose mother passed on last year amidst the global pandemic in the United States where she was battling cancer.

The family expressed the difficulties faced in bringing their deceased home due to the virus containment measures but were later successful. Rigathi is an uncle to Susan Maina and Mercy Wanjira.

Rigathi and Pastor Dorcas have been blessed with 2 sons namely Gachagua Rigathi and Ikinu Rigathi.

Gichagua’s net worth is thought to be approximately over Kshs. 300 Million. Gachagua has been linked to various scandals including siphoning money from Nyeri’s county government alongside his wife. More details regarding his net worth is yet to be established.