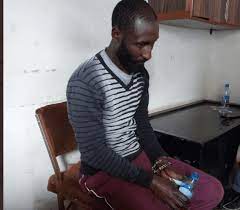 Yet again, Kenya is witnessing a serial killer emerge from their midst with chilling murder confessions. Evans Juma Wanjala from Uasin Gishu County follows after Masten Milimo Wanjala’s confession to taking the lives of twelve children around the country. This article looks into Evans Juma’s story highlighting his personal life, age and place of birth, and murder trail.

Evans is in his early-thirties.

Evans Juma has been a criminal for a long time. In 2018, he had also been charged for the rape of minors but was however released on bond.

Wanjala opened up to detectives on how he had taken the lives of five young girls between 2019 and 2021 in Eldoret’s Moi Bridge area. He told detectives that he would lure the girls, take them to secluded areas such as thickets and bushes, defile them, and then kill them.

Some of his victims were strangled to death and left their bodies in the bushes. One such case was retrieved by the detectives with evidence of rape and strangulation.

Eldoret residents were on the Eldoret-Kitale highway protesting ready to go after Evans Juma’s life. He had to be dressed in PPEs to conceal his identity as he led detectives to the areas he had defiled, murdered, and left the bodies of the five young girls for wild animals. Detectives told the media that two of the slain girls had their bodies stashed in gunny bags and covered with vegetables. Eerie news indeed.

The Mind of a Serial Killer

Psychologists describe serial killers as cold murderers who feel no remorse whatsoever for taking the lives of their victims. They will have certain patterns to their killings such as targeting a specific age group, gender, or a group with certain physical characteristics. Serial killers lack empathy and derive an unnatural pleasure from their murders.