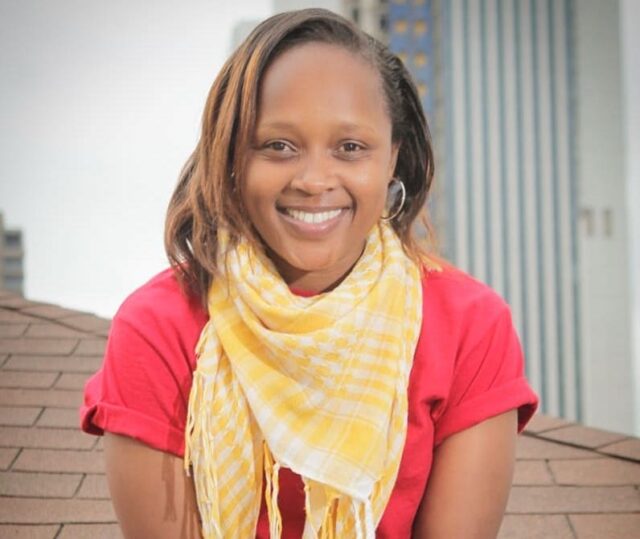 Defying of age and breaking all boundaries is what Shix Kapienga (Nancy Wanjiku Karanja) is all about. Be it in acting, performing comedy or hosting a top radio show, she has shown that she is able to do it all. She takes up all challenges thrown into her plate with all the grace and honor she embodies. She has become a well-known face on the Kenyan media stage and is definitely one of the personalities in Kenya who have remained exclusively true to themselves.

In this article, we see just what endears her to her fans and her background story in getting to understand her better.

Shix Kapienga (born Nancy Wanjiku Karanja) was born on the 27th of April in 1987. Having turned thirty-three this year, she is a remarkable young woman setting the pace for other youth in the country. She has is a sister to two sisters and one brother whom she loves dearly. Her parents live in Nairobi Kenya where she was born in a center called Kangemi. She is an authentic Kangemi child as she is well conversant with the Sheng slang predominantly spoken in the region.

After high school, she enrolled at Daystar University to study a Communications course.

Her main income streams stem from her radio career, roles she bags on several shows and film productions and from time to time, comedy. She is also sought after for emceeing events.

She first made a television appearance on the show Beba Beba which was aired on NTV playing the character, Tasha. This role offered her a platform to reach out to mor epeople who would then enlarge her fan-base. It also gave her an opportunity to develop her art better and improve greatly as an up and coming artist.

She later got to play roles in Shuga, Papa Shirandula and Nairobi Half Life. Here she played characters who faced much tribulations as girls in the society such as rape and betrayal by close family members. She mentioned in an interview that it is her role as an actress to shed light into the things that happen behind closed doors and should be brought to an end.

As a radio presenter, she hosts the Dropzone show on Hot 96 which earns her an additional source of income.

She has also been a key figure in promoting Airtel products and this endorsement earned her a decent income from the mobile company.

Shixs’ personal life has been kept private and she barely leaked out any of this information to the public. She is known as a tomboy who can rock both tomboy and girly looks.

Kapienga’s net worth has not yet been established at the time of this article’s publication nor are the details on her assets available to the public.