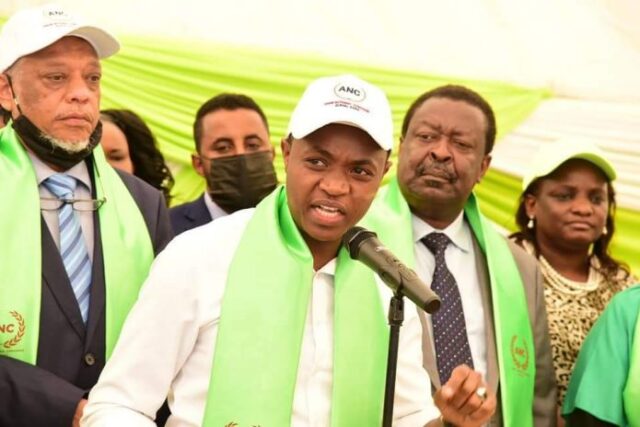 Simon Kamau Gikuru is a Kenyan-based lawyer who came into the limelight upon his appointment as Secretary-General at Musalia Mudavadi’s ANC Party in September 2021. With the recently unveiled Mudavadi earthquake, people have been asking about the lawyer and this article looks into his biography highlighting some of the questions raised.

He was born and raised in Kenya where he began his schooling. Simon Kamau is originally from the central region. As of 2022, Simon is in his thirties.

He is a graduate of Uganda’s Makerere University where he attained his undergraduate degree in 2012. Simon had a fulfilling experience at the institution enjoying both stellar performance and vibrant extra-curricular life. He led the revered Makerere Law Society during his tenure as president. He also obtained his Master’s degree in Law from the University of Nairobi.

He is passionate about Leadership issues and the United Nations Sustainable Goals as he dreams of a better and transformed continent in the near future. As a well-trained legal practitioner, he is a senior partner in charge of Research and Legal Writing at Chege Kamau and Co. Advocates.

Politically, he worked as a legal officer for the Alliance Party of Kenya in its elections board before he was elected the county chairman for the Jubilee Party in Murang’a County. On 23rd September 2021, he was appointed ANC Party’s Secretary-General replacing Barrack Muluka in a ceremony officiated by Musalia Mudavadi. The party leader commented on the appointment saying, “ANC Party has unveiled the youngest Secretary-General for a national political party in the country. We want to walk with the youth and ANC is going to become a party of the young people in Kenya. We are sending a strong signal that we are ready and want to incorporate the youth at all levels of leadership and government moving forward.”

Simon Kamau thus made history and has continued to represent the party’s commitment to youth matters as the majority of the country’s population. Commenting on the recent unveiling and launch of Mudavadi’s presidential bid for 2022, Simon said, “With Musalia Mudavadi we will form a government that has a space for everyone. We have a great nation, let not allow anyone to hold this nation captive.”

He keeps his private life away from the public eye and has not yet made any of this information publicly available.