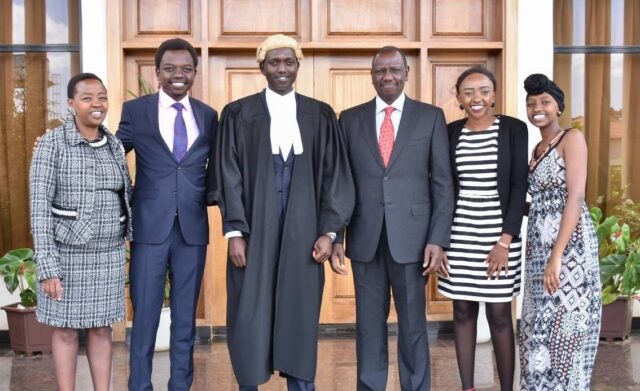 William Ruto’s children were seen arriving at his inauguration ceremony on Tuesday, September 13th. The former deputy president was sworn in as Kenya’s fifth president after a narrow win in the August 2022 general election.

Ruto is married to Rachel Chebet Ruto. The two have been married since 1991. The couple has grown to have six children since they tied the knot. Ruto also has another child with an ex-lover whom he publicly acknowledged in 2017.

Nick Ruto is the eldest son of president William Ruto and first lady Rachel. He was born on September 9th, 1991 in Dagoretti South after his parents got married. He pursued a Bachelor of Law degree at the University and was admitted to the bar in 2018.

The law graduate is a businessman who is deeply involved in charity. Nick is rumored to show interest in following in his father’s footsteps. There are unconfirmed claims that he was targeting to be a politician in the Turbo constituency.

June Ruto is William Ruto’s firstborn daughter. She is a public diplomat representing Kenya in Poland, who keeps away from the public eye. In May last year, June held a colorful wedding at Ruto’s Karen residence, when she got married to her Nigerian lover Alexander Azenagu.

The third-born daughter of the president, Charlene Ruto studied communication at Day Star University. Reports state that she is currently working at her father’s Weston hotel as the director of PR and branding.

In 2019, Stephanie Ruto graduated from Strathmore University with a degree in law. Her parents attended the graduation ceremony, and her dad wrote her a heartfelt letter. Stephanie likes to keep her life off social media.

George Ruto is the last born of the Ruto family. Not much is known about George as he keeps his life away from the media. He is, however, a pilot by profession. He takes after his father a lot, with an undoubted resemblance.

After seeing her abandoned as a child, William Ruto was touched by Nadia Cherono’s story and decided to adopt her. The five-year-old was then named after Ruto’s mother, Cherono soon after he adopted her.

In 2017, Ruto admitted to having had a child with his ex-lover. However, he rubbished claims of abandoning his daughter Abby, saying that he loved her like he loved all his other kids. Abby is currently a student at Alliance High School.